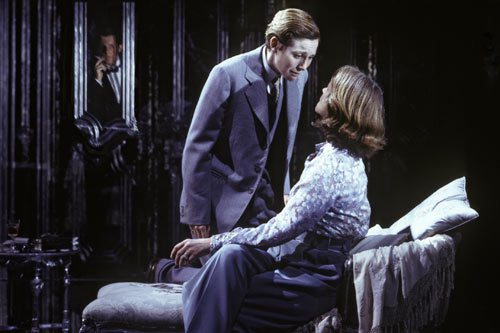 LONDON – It’s not just the servants who are false in this sleek and entertaining story of sexual intrigue in that elegant segment of French society known for its dangerous liaisons.

Martin Crimp has updated Pierre de Chamblain de Marivaux’s play from 1724 to an indeterminate but distinctly continental era that encompasses both a sense of 18th century flair and modern hubris. Director Jonathan Kent presents it with pace and flourish so that a piece of sexual gamesmanship, or rather gameswomanship, becomes both amusing and enthralling and finally quite moving.

In a swanky country chateau setting, designed wonderfully by Paul Brown and filled with tarnished silver and deceptive mirrors, a cavalier woman-chaser named Lelio (Anthony Calf) is set on a course of emotional destruction by a lithe but louche fellow known as Chevalier (Nancy Carroll).

Fey but confident, Chevalier quickly learns that Lelio is promised to their hostess, the Countess (Charlotte Rampling, pictured with Carroll), but determined to drop her for a better catch. Little does he know that the Chevalier is in fact the new object of his purse-driven lust convincingly dressed and coiffed as a man.

The Countess is similarly fooled by Chevalier’s feigned masculinity and as the intrigue continues, she falls under “his” spell, leading to a merry old cross-dressing romp.

It is some trick to accept that the beautiful Nancy Carroll is a handsome young boulevardier but costumes and makeup and fine acting largely suspend disbelief. It helps that the pacing is swift, the jokes funny and the dialogue tart. 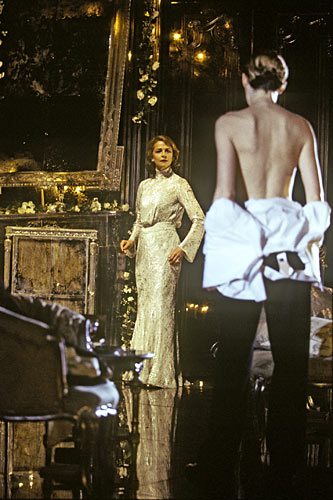 Anthony Calf is all decayed sophistication as Lelio and there is a wonderful performance by Adrian Scarborough as the servant whose self-interested conniving helps fuel the mischief.

Dominating proceedings, however, is the Countess, played by Charlotte Rampling with the authentic stillness and sexual dominance that she has brought to some memorable screen roles. Dressed in the most elegant gowns but looking as if she has lost faith in the power of her sensuality, Rampling plays the Countess as a fading beauty on the verge of exhaustion with romance. Pursued falsely by both Lelio and Chevalier, she suggests a fabled equilibrium that has lost its assurance.

In the scenes of seduction by Chevalier with Carroll all dinner jacket and Marlene Dietrich decadence, Rampling toys with the sly implications and the stage is redolent with salacious possibilities.

There is a cold cruelty about all of these characters, however, and Marivaux does not let any of them off the hook. In Crimp’s lively and insightful translation, there are issues of love and deception that go deeper than simple French farce.