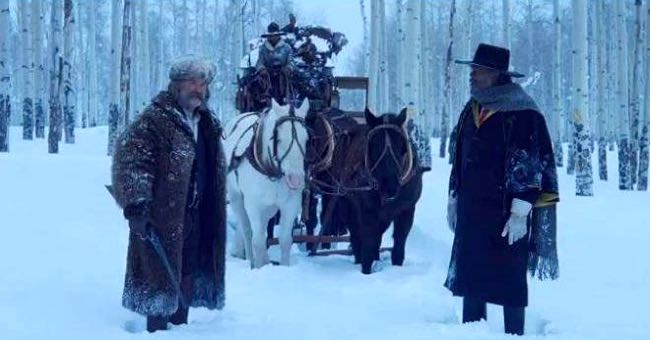 LONDON – Quentin Tarantino’s western “The Hateful Eight” reveals him as a horrible sham who relies on the skills of talented filmmakers to make his pictures look and sound great despite his absence of talent as a director.

Tarantino has learned how to write only one scene: two or more people speak interminable gibberish and then one or more of them dies bloodily. “The Hateful Eight” is three hours of that.

The film is misogynist, racist and derivative rubbish drawn from the garbage B-movies Tarantino became obsessed with as a video store clerk.

He proclaims his love of grand film techniques and claims a political voice on civil rights in order to obscure his ineptitude as a filmmaker and his desire to use the word “nigger”.

Inept and lazy, Tarantino has no idea how to craft a story with depth and meaning. This film stages the confrontation of a miscounted number of characters in the service of a meaningless plot of revenge.

The opening takes place in a stagecoach in the U.S. Northwest some time after the Civil War and the story plays out in a remote  staging post. A decent filmmaker could have shot it on an iPhone.

Kurt Russell apparently thought he had a John Travolta moment of career comeback as a lawman transporting a female melefactor (Jennifer Jason Leigh) to be hanged. Bushy and loud, he’s mistaken. He’s riding on a stagecoach through desolate country in deep winter and he reveals to everyone he meets that his captive is worth $10,000 dead or alive. Tarantino doesn’t want you to forget it.

The first stranger to crash the party is Samuel L. Jackson, a bounty-hunter with two dead bodies and a colourful outfit that grows cleaner and more impressive throughout the film. A gunman played by Walton Coggins also takes the stage and the first chapters are filled with boring exposition as everyone explains to the others and the audience who are they are and what they’re doing.

They arrive at a way-station that Tarantino likes to call a haberdashery where more strangers are added to the simplistic Agatha Christie-like puzzle. Then it’s “Ten Little Niggers” all over again. Except that people die in an absurdly extreme manner and it’s impossible to care who lives or dies.

Cinematographer Robert Richardson does wonders with the outdoors and the interiors but Tarantino has no ability to establish claustrophopic tension in the stagecoach. Production designer Yohei Taneda gives the director a marvellous setting for the bulk of the film but Tarantino treats it the way a stage director would. Most of his scenes involve two people and the others stay obligingly out of the frame or sit quietly as they would in a stage production.

More than one character suggests that there is someone in the place who is not what he or she claims to be, something that most audiences would take for granted. There’s a vital plot point that Tarantino has no idea how to depict and so he simply adds a voice-over to explain it, using his own voice. Redundant characters are dispatched with repulsive cynicism.

There’s a protracted and disgusting exchange between Samuel L. Jackson and Bruce Dern that will remind immediately anyone who has seen “True Romance” of the scene in that film with Christopher Walken and Dennis Hopper.

The difference is that Tony Scott was an accomplished director who understood how to spin trash into cinematic gold. Tarentino doesn’t realise that it’s trash. Scott’s scene had electricity as he drew from his two actors performances of subtlety and wit. In Tarantino’s clumsy hands, lacking any direction, Jackson delivers his lines in the same way he complained about snakes on a plane and Dern gives the same blank stare as the befuddled old man he played in “Nebraska”.

The film lumbers towards its inevitable climax with not a shred of suspense. The violence is typically stupid. Tarentino has no clue how to direct action and so his performers convey no ability to move onscreen. Think how gracefully kinetic Kevin Costner and Scott Glenn moved under Lawrence Kasdan’s direction in “Silverado”.

Jason Leigh is violated and humiliated as if she should be grateful for a Travolta moment. Walton Goggins, as the gunman, deserves to be a movie star and it’s hilarious that some critics think they’ve discovered him because they don’t watch TV. Goggins was sensational in “The Shield” and in the long-running “Justified” where he delivered dialogue far superior to anything Tarantino could manufacture.

The music in the film is a weird hybrid of dull Ennio Morricone cues and anachronistic pop songs that serve only to underscore how squalid is Tarantino’s view of what murder means in cinematic entertainment.