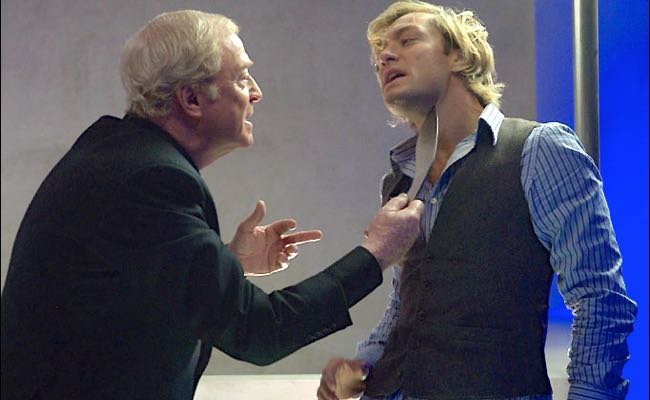 VENICE – Kenneth Branagh’s new version of the crime caper “Sleuth” looks smashing and it features several great lines by screenwriter Harold Pinter. But despite top-flight acting from Michael Caine and Jude Law, it loses its grip in the third act and let’s the air out of what might have been a memorably gripping film.

The idea of Caine in a remake of the 1972 production in which he costarred but this time playing the Laurence Olivier role, and Jude Law, who has already stepped into Caine’s shoes in “Alfie,” doing Caine’s part will no doubt intrigue audiences. The quartet of big names and a tight 86-minute running time also will help, but the film’s downbeat tone won’t encourage huge boxoffice.

The Joseph L. Manciewicz original was a theatrical romp some 50 minutes longer than the new version and Olivier, having mocked Anthony Quayle for stooping to it onstage, hammed it up mercilessly.

Pinter’s screenplay pares the plot to the bone: two men argue and subject each other to humiliating game-playing over the love of a woman. Out-of-work actor and part-time chauffeur Milo Tindle (Law) shows up at the impressive country mansion of wealthy bestselling novelist Andrew Wyke (Caine) to demand that he grant his wife a divorce.

Pinter sets the rules at the front door showing that this is an all-male affair with the two men comparing the size of their … cars. Wyke never misses a chance to observe that Tindle is what the English call an oik, an ignorant young man of little worth, mocking everything about him including his name, parentage, accent, job, appearance, you name it. The younger man grins and explains what he and Wyke’s missus like to do with each other.

Soon the author has an offer to make. He will let Tindle keep his wife if he will do him the favor of breaking into his highly stylized home and stealing some gems worth close to a million pounds. He says he doesn’t want his wife back and but wishes to provide for her and needs the insurance money. Of course, there’s a catch and this is merely the opening serve in what will become a three-set match.

The setting is Wyke’s opulent home filled with modern art and all kinds of doors, windows, mirrors, sky-lights, ladders, stage lights, and even an elevator, that operate by remote control. He also has an elaborate security set-up with cameras that number up to the 800s.

Tim Harvey’s production design captures the mood of the piece brilliantly and Branagh and cinematographer Haris Zambarloukos make the most of it. Composer Patrick Doyle’s nimble score adds greatly to the film’s enjoyment.

Pinter produces some cracking lines of dialogue that Caine and Jude relish to the full. He even has Law ask: What’s it all about? The two actors deliver movie star performances of the highest level and their gamesmanship is hugely entertaining. Until, that is, the third set when a grimmer mood takes over along with considerable homoerotic banter that seems to have little grounding and lacks wit. “Sleuth” is the kind of film that should leave audiences with a wicked smiling shiver, but that’s not the case here.