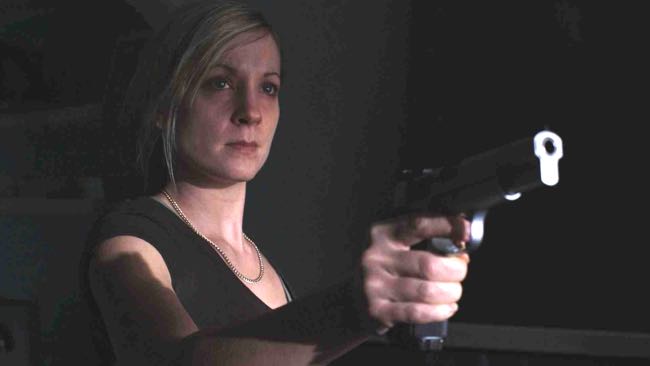 LONDON – A sober portrait of a returning soldier who suffers from post-combat stress, “In Our Name” holds suspense without melodrama and features an outstanding performance as the British Army private by Joanne Froggatt (pictured).

The actress, seen often on TV in series such as “Downton Abbey” (set for PBS in the New Year) and the BBC’s recent revival of “Robin Hood”, was named most promising newcomer at the recent British Indepenent Film Awards.

Froggatt plays a young medal-winning soldier named Suzy who in the opening scenes returns with some trepidation from serving in the Middle East to her rundown estate in England’s North East.

Writer/director Brian Welsh, an established film editor, takes time to show Suzy dealing with a heroine’s welcome by her family; the sexual hunger of husband Mark (Mel Raido), who is also in the army; and the feelings of her young daughter Cass (Chloe-Jayne Wilkinson), who is unhappy that her mother has been away for so long.

Suzy’s traumatic state begins to show as the city’s urban decay starts to resemble bombed-out buildings and the sight of hooded teenaged boys huddling with nothing to do at night reminds her of men with guns and explosives.

Her increasing distance from her husband sparks frustration and aggression and the visit of one of her squad members, Paul (Andrew Knott) sends Mark into a jealous frenzy.

Welsh sets an even tone as the husband’s own deep trauma is revealed slowly and he harbors his memories of horrible deaths with considerable relish. Key scenes in a classroom when Suzy relates the death of a child and an encounter with a Muslim taxi driver set events in motion that lead to violence.

Froggatt conveys the woman’s preoccupation to suggest that whatever she’s looking at, she actually sees something entirely different. It’s a haunting performance aided by Sam Care’s patient cinematography and Stuart Earle’s music, which often hovers on one searing note, like the images in the woman’s mind.