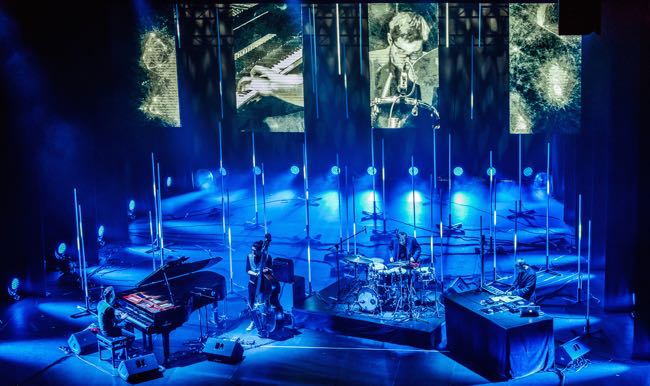 KRAKÓW – The annual Kraków Film Music Festival showed its adventurous side on May 26 with a fascinating programme of jazz interpretations of film music by treasured Polish composers Henryk Wars and Bronisław Kaper by the Audiofeeling Trio, with deejay Mr. Krime, titled “Wars & Kaper: Deconstruction”.

Led by acclaimed Polish jazzman Paweł Kaczmarczyk, the trio included Jakub Dworak on double bass and David Fortuna on drums with input from the turntable of Mr. Krime. Passionate, intense and highly talented, the players performed a crowd-pleasing selection of cues and songs by the two composers from the Thirties, Forties, Fifties and Sixties.

Henryk Wars, who was born in Warsaw in 1902 and died in 1977 aged 76, was a prolific composer who was drafted into the Polish Army at the outbreak of World War II. Taken as a prisoner of war by the German Army, he managed to escaped. He emigrated to the United States in 1947, changed his name to Henry Vars, and wrote songs for stars such as Doris Day, Bing Crosby and Dinah Shore. He composed the score and title song for the “Flipper” movie and TV series and for “Daktari”.

In a 90-minute concert in the Theatre Hall at the ICE Kraków Congress Centre, Kaczmarczyk and his group ran through four Wars compositions: “Along the Milky Way” from the war drama “Wielka Droga” (1946), directed by Michal Waszynski; “Oh Sleep My Love” from the comedy “Paweł and Gaweł” (1938), directed by Mieczyslaw Krawicz; and “You Won’t Forget Me” and “Mister John” from the romantic musical “Forgotten Melody” (1938), directed by Jan Fethke and Konrad Tom.

The Kaper pieces were: “Invitation” (which has become a jazz standard) from the drama “Invitation” (1952), directed by Gottfried Reinhardt and starring Van Johnson, Dorothy McGuire and Ruth Roman; “Ninon” from the drama “Tout pour l’amour” (1933), directed by Henri-Georges Clouzot and Joe May; “All God’s Chillun Got Rhythm” from the Marx Bros. comedy “A Day at The Races” (1937), directed by Sam Wood, and performed in the movie by Ivie Anderson, Harpo Marx and the Crinoline Choir; and “Follow Me” from “Mutiny on the Bounty” (1962), directed by Lewis Milestone and starring Marlon Brando and Trevor Howard.

It must be said that the visually exciting show was very well received by the packed audience and there was no doubting the calibre of the performers as each showed in several solos. The intensity of the players and constant repitition,  however, began to overwhelm the individuality of the pieces as if they were channeling Dave Brubeck’s “Blue Rondo à la Turk” over and over. It started to seem that if you’d heard one Wars or Kaper track then you’d heard them all, which is very much not the case.

The audience applauded the contributions of the deejay although this viewer found the constant turntable scratching an irritant. At first, it seemed he might add illuminating dialogue and Foley sounds from the old pictures in the manner of Ry Cooder’s “Chavez Ravine”, but it wasn’t to be.

Only once, as the trio returned for an encore, and performed did the playing let in some air so that the true personality of a Kaper song could be appreciated. It was “While My Lady Sleeps” from the musical comedy “Chocolate Soldier”(1941), directed by Roy Del Ruth and sung in the film by Nelson Eddy.

I could have listened to that all night.