In its world premiere on the National Theatre’s Cottesloe stage, the play is a laudable attempt at finding the cracks in supposed contentment, and there are some well-made scenes and entertaining dialogue. But Coxon has not acquired the necessary skills with scalpel, ice pick and dental drill that suggest she’s anywhere near Pinter or Albee in dissecting marriage. 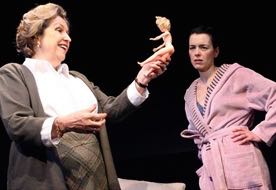 Kitty (Olivia Williams, right, with Anne Reid) is surprisingly intrigued by the out-of-town hotel room cynicism of Michael (Stanley Townsend), who is the kind of oleaginous creep who asks every woman he meets to sleep with him.

She turns him down, but his snide depiction of the everyday nature of relationships is enough to make her begin to second-guess life with Johnny (Jonathan Cullen). He has left the rat race to pursue his dream of being a teacher and be closer to their kids only to discover it’s not much different.

The couple’s closest married pals, Miles (Dominic Rowan) and Bea (Emily Joyce), are little help. Miles is a drunk, and Bea is obsessed with whether the walls of their home should be beige or off-white. They each envy what they believe is the carefree life of gay friend Carl (Stuart McQuarrie) while not really understanding anything about him. Kitty also must deal with her divorced parents — an unseen but very ill father and a mother (Anne Reid) — whose lifelong resentment is all too present.

The play touches on many of the things that tend to cause anguish in marriage, and the cast gets into the spirit of disillusionment with Williams especially relishing the best lines. But it’s all a bit shallow and naive.