THEATRE REVIEW: Pinter’s ‘The Lover’ and ‘The Collection’ 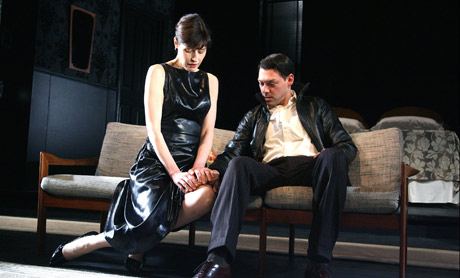 LONDON – Nobel Prize-winning playwright Harold Pinter has long been fascinated by the tension that exists between two men who love the same woman.

It got out of hand in the recent film version of Kenneth Branagh’s “Sleuth,” but it is demonstrated in much subtler ways in “The Lover” and “The Collection,” now revived at London’s Comedy Theatre.

Both written for British television in the early 1960s, the two clever and amusing one-hour tales deal with deception and infidelity viewed with Pinter’s typically cool and distant eye where all is not as it first appears.

Harold Pinter’s “The Lover” and “The Collection” starring Gina McKee and Richard Coyle (pictured) are at London’s Comedy Theatre until May 3.