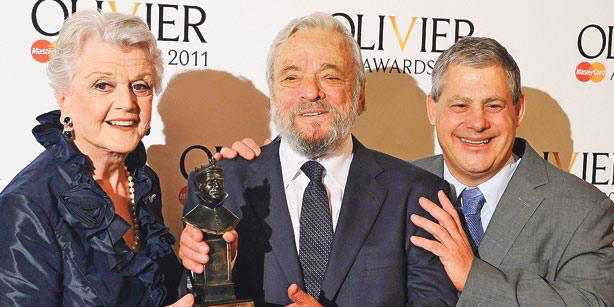 It wasn’t only Broadway that Stephen Sondheim loved. In London in 2011 to mark his 80th birthday, the Tony Award-winning composer and lyricist who has died aged 91, accepted a Special Laurence Olivier Award for his outstanding contribution to the stage. ‘I want to talk about the contribution British theatre has made to me,’ he said. ‘I am so grateful.’

He listed a string of productions including ‘A Funny Thing Happened On the Way To the Forum’, ‘Follies’, ‘Into the Woods’, ‘Sunday in the Park with George’, ‘Passion’, ’Assassins’, and ‘Sweeney Todd’.

Presenting his award at the Theatre Royal Drury Lane were Angela Lansbury, who starred on Broadway in ‘A Little Night Music’ and ‘Sweeney Todd’, and British theatre mogul Cameron Mackintosh (pictured above with Lansbury), who produced ‘Follies’ in London and in 2019 renamed Queen’s, one of his venues on Shaftesbury Avenue, the Sondheim Theatre.

Mackintosh sat with Sondheim on stage as Lansbury sang the nostalgic number ‘Liaisons’ from ‘A Little Night Music’ and the three-hour production ended with a massed choir of theatre students who sang ‘Our Time’ from ‘Merrily We Roll Along’.

Speaking to reporters afterwards, Sondheim said that he treasured what he called ‘the fresh eye’ of British directors. ‘Having your work re-imagined is what makes theater immortal,’ he said.

Sondheiim’s distaste for critics was well-known but in 2012 he accepted the U.K. Critics’ Circle Award for Distinguished Services to the Arts. Friendly and approachable, he noted drily that he had some affection for the London critics because they had given him his first decent reviews. The presentation took place during a luncheon at the theatrical venue still named the Menier Chocolate Factory after its previous occupants in London’s East End. Maria Friedman, who won the Olivier Award for best actress in a Musical in 1997 for ‘Passion’, performed several Sondheim songs. 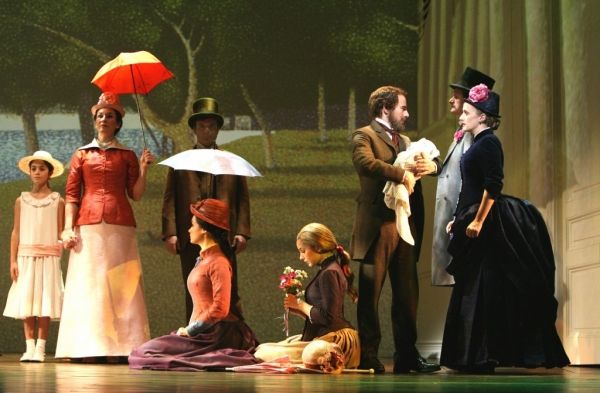 The setting was appropriate because in 2006 the Menier company’s production of ‘Sunday in the Park With George’ (pictured) was impeccable. Directed by Sam Buntrock, it revealed the true beauties of a difficult show and fulfilled  Sondheim’s ambition to meld his music with the artistry of Georges Seurat’s sublime paintings.

Caroline Humphries’ musical direction was sharpness itself while the singing was glorious. Daniel Evans, as an artist who marched to a different drummer but led a solitary life, delivered some of Sondheim’s most inventive lyrics masterfully. Jenna Russell, as the beautiful but neglected Dot used a northern English an accent that gave a deeper resonance to words such as ‘Sunday’.

It remains the finest stage musical that I’ve seen, and I’ve seen plenty. It went on deservedly to be a West End and Broadway triumph.

Recalling John Gardner, a master of the spy novel

LONDON – John Gardner, who would have been 95 today, should rank with Eric Ambler, John le Carré, Len Deighton and Philip Kerr as a virtuoso of the serious British spy novel.

He is known best now for writing fourteen James Bond adventures starting with ‘Licence Renewed’ in 1981 plus novelisations of the films ‘Licence to Kill’ and ‘GoldenEye’. Before that, the Northumberland-born writer had terrific spy tales featuring Boysie Oaks and Herbie Kruger.

Len Deighton said Gardner was ‘A master storyteller at the height of his power’ when he published ‘The Secret Generations’ in 1985. It was first in a trilogy including ‘The Secret Houses’ and ‘The Secret Families’ that explored the history of two families immersed in the world of secret intelligence from World War I to the Eighties. 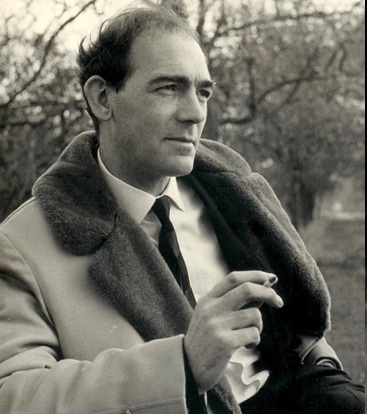 ‘I get letters from Bond fanatics,’ Gardner told me in 1989, ‘who probably like to believe this is what it’s all about being a secret agent – dashing all over the world killing people. It’s not true, you know.’ He knew that spy stories needed spice, though. ‘I think the intelligence world is a fairly boring existence most of the time except on a cerebral plain,’ he said. ‘Those of us who write about it in fictional terms have to jazz it up a little bit.’

Only child of an Anglican minister and his wife, Gardner said his earliest memories were of long annual vacations in Europe in the Thirties. He and his parents got out of Paris the day before World War II was declared. Growing up in a small English country town, he  became aware of eavesdropping and paranoia. ‘You’d walk down an unfamiliar street,’ he said, ‘and you’d see the lace curtains twitching as people watched.

An officer cadet at school, he volunteered for service when war broke out but he was too young. Instead, he staged magic shows for the Red Cross at U.S. military bases in Britain. Later, he served overseas in the Royal Marine Commandos and studied theology at Cambridge. He was ordained as a minister until he came to realise that he had made a mistake and, in his turmoil, he turned to booze. Working as a drama critic for the Stratford-upon-Avon Herald, he realised he was in real trouble and, on the path to recovery, he wrote his first book, ‘Spin the Bottle: The Autobiograpy of an Alcoholic’.

Gardner hadn’t had a drink in thirty years when I spoke to him and his novels were always a pleasure to read. If real and fictional spy cases made people in the west fearful, he argued, ‘The price of freedom is paranoia, as someone once said. If we’re going to live in a free world then we’ve got to be slightly paranoid.’

Glasnost and prestroika were in full flow in the Soviet Union but Gardner was not convinced. ‘I don’t believe Margaret Thatcher when she says the Cold War is over,’ he said. ‘I don’t believe it for a moment. Maybe it’s over as far as the British intelligence services are concerned but I don’t think it’s over for those gentlemen in Dzerzhinsky Square and in that large, peculiar building just off the Moscow ring road. I think they’re hard at it.’

Gardner wrote the Bond stories at the request of the Ian Fleming estate but one of  his own characters might have been just as popular in movies. ‘The Liquidator’, his first novel, was a smart and funny spoof about a reluctant secret agent named Boysie Oakes. Mistakenly thought to be a ruthless killer but actually a coward who hates guns, he hires a real assassin to bump off people in order to keep the rewards coming. Gardner wrote seven Boysie books but only the first was made into a film starring Rod Taylor as Boysie, Trevor Howard as his control and comic Eric Sykes as the real killer.

‘It was supposed to have been a three-picture deal and that’s why I liked it,’ Sykes told me. ‘The idea was that in the second one Trevor Howard found out about Taylor hiring me for the killings and in the third one he decided he didn’t need Taylor and simply used me. Unfortunately, the backer ran out of money, or something, and the first film was held up in litigation for over a year. By the time it was released, the spy boom was over and it had missed its time. The deal on the other pictures fell through.’

Sykes remained one of Britain’s most treasured comedians and Gardner wrote many more novels including a fine series featuring British secret agent Herbie Kruger based in Germany. They include a terrific yarn he had in mind for a long time, ‘Maestro’, about a celebrated orchestral conductor’s secret life as a spy. Gardner kept writing until his death at the age of 80 in 2007. He told me he kept a plaque on his desk that read, ‘Old age and treachery will overcome youth and skill every time.’ 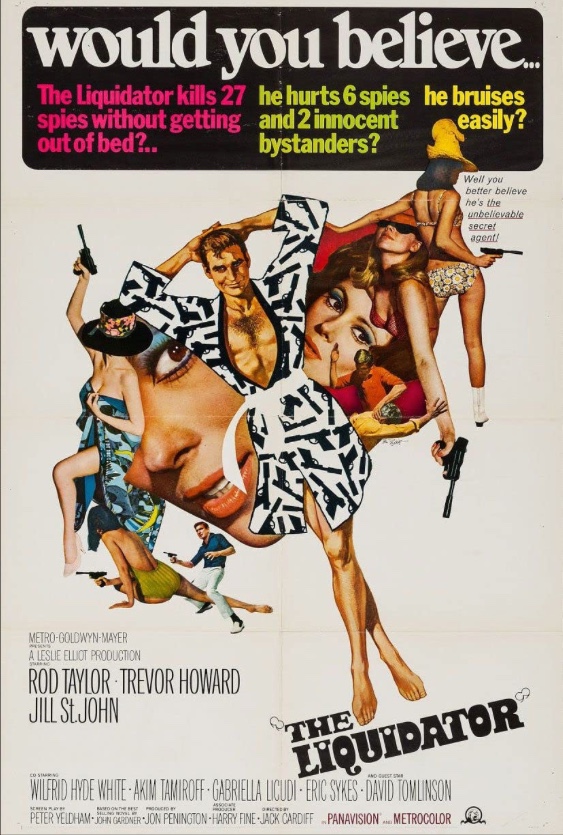 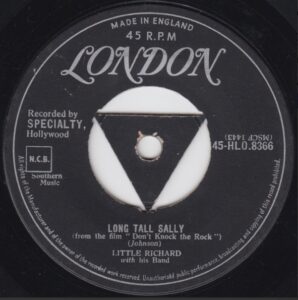 I recall the first single I ever bought – Little Richard’s ‘Long Tall Sally’ on 78 rpm. And the first album – the soundtrack to Doris Day’s ‘Love Me or Leave Me’. A ten-inch vinyl on 33⅓ rpm. The first twelve-inch – Johnny Cash’s ‘Now There Was a Song’. The first 45 rpm – Elvis Presley’s ‘Don’t Be Cruel’. I had eclectic tastes even then. END_OF_DOCUMENT_TOKEN_TO_BE_REPLACED 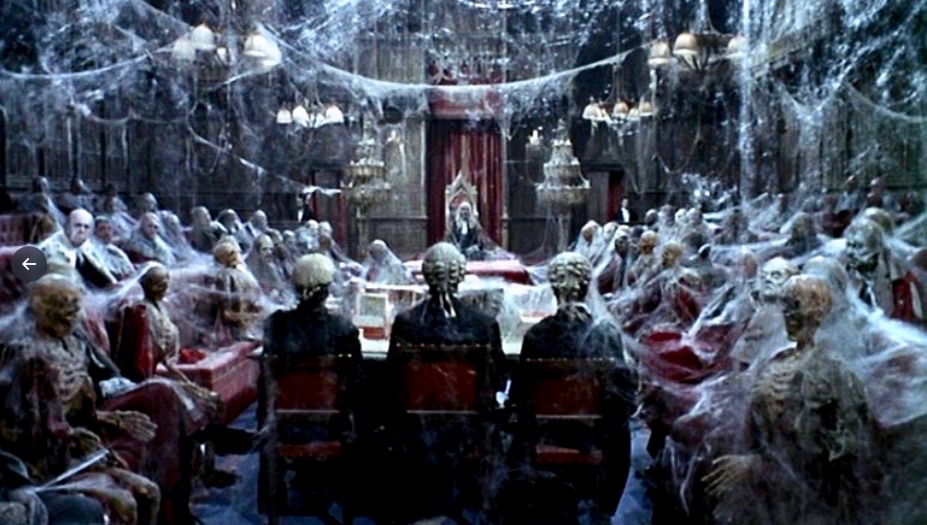 Only last week, a bill was passed in the House of Lords than deprives hereditary peers – traditionally a strange and eccentric bunch – of the right to vote on government bills. The event was marked by one lord leaping onto the Woolsack, or throne, of the house in order to manifest his objection. END_OF_DOCUMENT_TOKEN_TO_BE_REPLACED 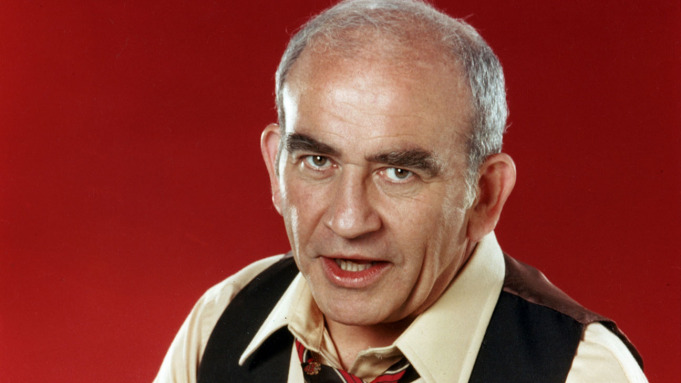 ‘I have run into downright discrimination against me because of being a TV face,’ he told me in 1979. ‘Director George Roy Hill is recognised as being totally averse to using someone from TV. Barbra Streisand and Jon Peters didn’t want me for “A Star is Born”. Same with “The Godfather”. Henry Winkler and John Travolta seem to go back and forth but with me it’s “Go fuck yourself. Now.”’ END_OF_DOCUMENT_TOKEN_TO_BE_REPLACED 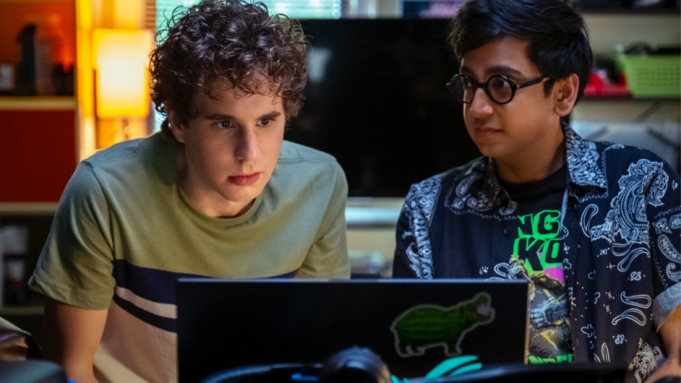 BFI celebrates the films of Robert Altman in major season 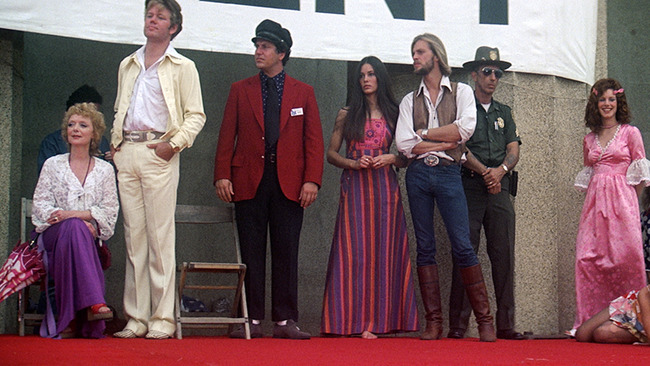 LONDON – Robert Altman movies spanning five decades are to be screened in a major season at the British Film Institute. Running from May 17 to July 31, the programme will present 34 films in chronological order including ‘Nashville’ (above), which also will be released in select cinemas across the U.K. on June 25 in a 4K restoration. END_OF_DOCUMENT_TOKEN_TO_BE_REPLACED 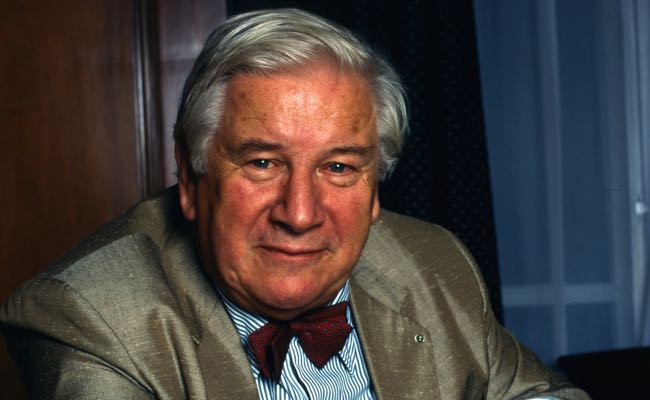 LONDON – Playwright, filmmaker, actor and raconteur Peter Ustinov, who was born 100 years ago today and died on March 28, 2004, was convincing in movies playing many different nationalities. One reason for that was because he was a wonderful mimic. I first met him at a cocktail party in the mid-80s in Toronto when he was promoting ‘Death On the Nile’, his first outing as Hercule Poirot with that strange Belgian/French accent. Given the vast range of dialects he had mastered, I asked him what had been the most difficult accent to imitate. Ustinov thought for a moment and said, ‘A Glaswegian Chinese man’  and he proceeded to give an hilarious example. END_OF_DOCUMENT_TOKEN_TO_BE_REPLACED 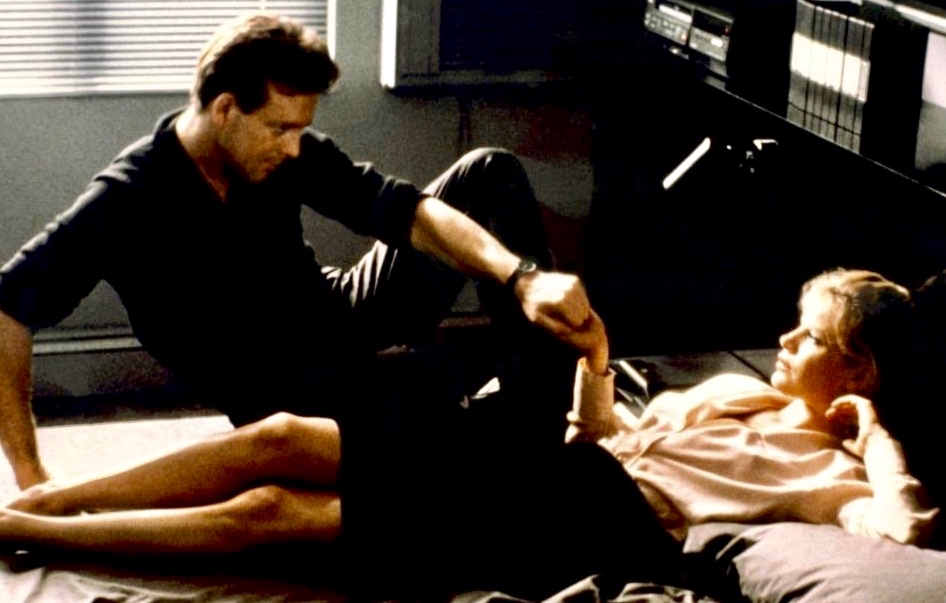 LONDON – British director Adrian Lyne, who turns 80 today, is known for his provocative films about sexuality but a preview audience for ‘9½ Weeks’ made him run for his life. END_OF_DOCUMENT_TOKEN_TO_BE_REPLACED 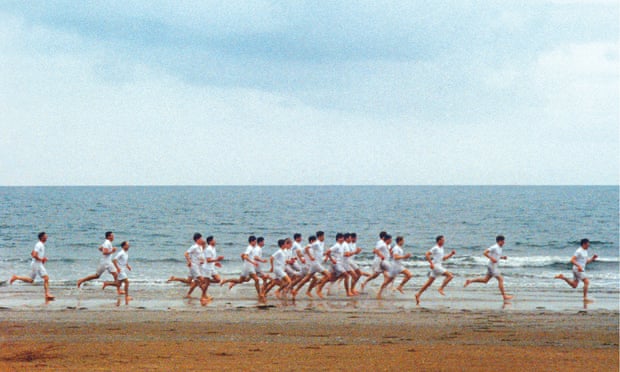 LONDON – Aside from being English, David Puttnam and I have two things in common. We are both devoted to Tottenham Hotspur Football Club and we each obtained three O-level GCEs at school. He, of course, had an illustrious career as an Academy Award-winning producer of hit movies and became a fine politician working within the Labour Party to boost education and the British film industry as a member of the House of Lords. I did not. END_OF_DOCUMENT_TOKEN_TO_BE_REPLACED