British period TV police drama “George Gently” will air for the first time on US television on public television stations across the country early next year. It stars Martin Shaw from the cult 1970s action series “The Professionals” as a 1960s Scotland Yard detective relocated to the north of England.

Broadcast rights to the show, produced by Company Pictures for the BBC, will be managed in the U.S. by Acorn Media, which has released the first three series on DVD in North America. 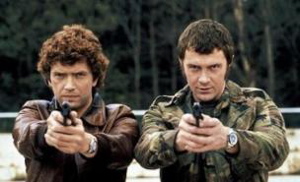 Shaw, left, and Lewis Collins in 'The Professionals'

The deal with Company’s parent company All3Media follows Acorn’s success on DVD and TV in the US with the long-running English crime series “Midsomer Murders.”

All3Media International Sales VP Peter Grant said, “The series has been in high demand around the world and a premiere in the US is a fantastic landmark in the ‘George Gently’ story.”

Based on a series of crime novels by Alan Hunter and scripted by Peter Flannery (“Funny Bones,” “The Devil’s Whore”), “George Gently” tells of crimes investigated by a tough London police officer in Northumberland, near the Scottish border.

Shaw won international success as the mop-topped CI5 agent Doyle in the long-running 1970s action series “The Professionals” costarring Lewis Collins and Gordon Jackson and he had the title role from 2001-2007 in the TV legal series, “Judge John Deed”.

An acclaimed stage actor, Shaw was nominated for a best actor Tony Award and won the Drama Desk Award for outstanding featured actor in a play for his 1996 Broadway appearance in Oscar Wilde’s “An Ideal Husband.”

Lee Ingleby, who played Hollum, the Jonah in Peter Weir’s “Master and Commander: The Far Side of the World,” plays his young detective sergeant.

This story appeared in The Hollywood Reporter