Recalling … Jim Morrison and The Doors live in Detroit 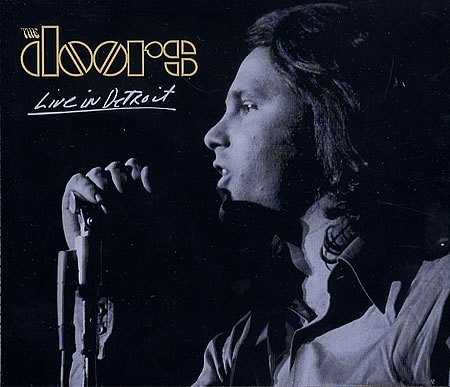 This review was written right after the concert that was recorded for “Live In Detroit” on the night of May 8, 1970.

First there was the Blues Image, then came John Sebastian. Late of the Lovin’ Spoonful and still picking and singing beautiful gems like Daydream, She’s a Lady and Younger Girl, Sebastian had bad technical troubles at Cobo.

With only his nimble guitar-playing fingers for accompaniment the lad was fouled up with feed-back troubles with his microphones and a faulty strobe light that flashed maddeningly every few seconds during the majority of his performance. But the near-capacity crowd was with him all the way and yelled for his return when his performance was over. 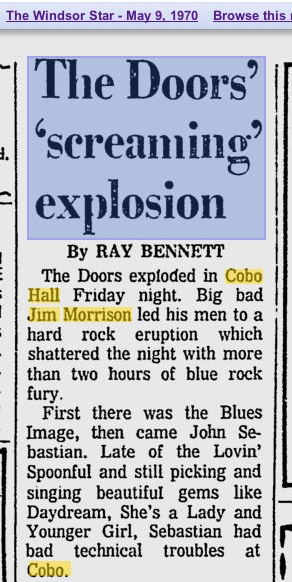 Intermission time. Lights were subdued. Morrison strolled insouciantly on stage in a multi-colored jacket and smoking a cigarette. The lights went down. The men began to play – organ, drums, one guitar. Still smoking and taking occasional sips from a bottle of beer, Morrison began to sing.

It was heavy stuff and if you didn’t know the songs you wouldn’t recognize them but that mattered less. No talk. One song runs into the next with Morrison – his jacket off and his stomach beginning to bulge a little over his belt these days – unsmiling and almost treating his adoring audience with disdain.

The audience was his. Completely. To those of us not hard-core Doors fans the reason for this at first was not clear. The music was loud and heavy with Morrison standing stiffly clutching the microphone screaming into its amplified recesses.

For almost an hour it went on like that. Pounding, driving, roaring sound that battered your ears and left your head spinning. The noise gains a monotony. But then the monotony settles into you.

You begin to wonder where it can go. Then you feel the monotony dissolve into something almost tangible. There are rhythm patterns and drifts and waves amid the compulsive sound. The band is really into it and getting tighter by the minute. Morrison is screaming.

Looking around you see other kids screaming back and suddenly you know what’s going on. You know what Morrison and the Doors are doing.

The loudest sound in the world, they say, is the human scream. Morrison is the human scream. The crashing repetitive music sets you up and dumps you right in the middle of a memory of when you last wanted to scream. For whatever reason – frustration, grief, anger, joy. But you didn’t scream, you held it in. Now there’s Morrison screaming at you, the music is pounding within you. You want to scream, and scream.

That’s how it is.

Friday night, Morrison showed the way and the audience at Cobo screamed their heads off. At what looked like the end of his set people were standing on their chairs yelling for more.

“We’re not going to let them throw us out, are we?” demanded Morrison. The crowd roared a defiant no. The organ intro to Light My Fire began and the kids on the main floor of the arena surged forward spontaneously. They never played Light My Fire better.

The Doors did another number then Morrison called for John Sebastian to join them. That’s when Morrison dropped his bombshell. Tension in the pace was almost tactile. The sense of defiance that Morrison personifies was rampant.

Then the lead Doorman let everyone in on the secret that the show was being recorded for possible release as an in-concert record album Live in Detroit. Flattered, the kids roared their approval.

The final song was This is the End. Kneeling down Morrison put the microphone between his legs, drew it up slowly to his face and let rip the most incredible gut-tearing scream of his career.

Exhausted he fell off the stage into the crowd of bra-less girls who grabbed him ecstatically. Stewards rushed to haul him back and the show was over.