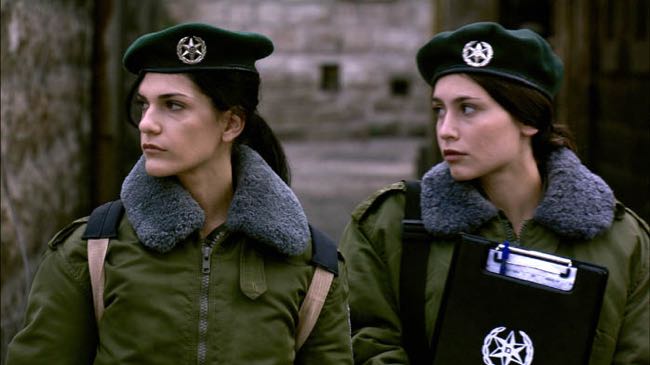 “Close to Home”, which just opened in the U.K., is an intriguing portrait of two young women who try to enjoy life as teenagers while they serve as security officers in Jerusalem.

LONDON — Sympathy isn’t often strong for the men and women who wave radar scanners, poke through bags and make people empty their pockets at security checkpoints but a thoughtful little Israeli film titled “Close to Home” makes a case for those overlooked workers.

It offers a different perspective on a type of work that plays an increasing role in everyone’s life and features appealing performances by the two leads. It could do well in art houses and at festivals.

Naama Shendar and Smadar Sayar play teenagers in the Israeli military who patrol a section of Jerusalem close to the city gates. Their job is to check the identity cards of people who appear to be Arabs, an occupation that involves embarrassment, humiliation and fear.

The group in which they serve is run by a severe commanding officer named Dubek (Irit Suki), who reminds them constantly that while on patrol they are not to eat or smoke, speak on a cell phone or even sit down.