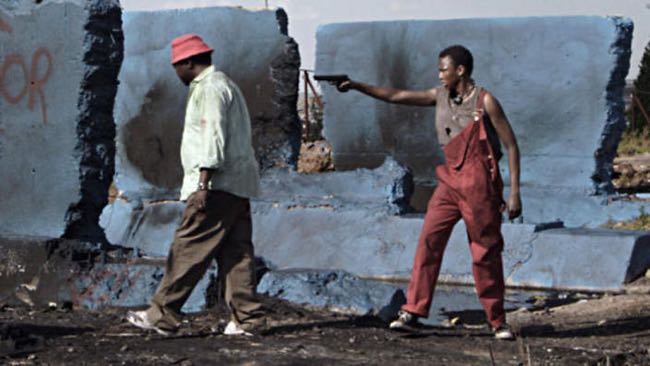 TORONTO – Khalo Matabane’s South Africa-set “State of Violence” is a sturdy and straightforward parable about the way violence becomes an endless cycle unless someone is prepared to put a stop to it.

Its linear story is told efficiently in less than 80 minutes and the film might well travel as a cautionary tale but it lacks the sparks of urgency and originality that would make it stand out from earlier such pictures.

Rugged and strong-browed Fana Mokoena plays Bobedi, a self-made businessman with a fine home, a fancy car and a beautiful and loving wife, Joy (Lindi Matshikiza).

His happy life comes to an end when a young man with a gun breaks into his home, yells out Bobedi’s youthful nickname – Terror – and kills Joy, crying out that he wants Bobedi to feel the same pain that he does.

The police investigate but Bobedi sets out to find the killer, which means a return to the crowded backstreet maze of the township where he grew up. His brother Boy-Boy (Presley Chwenenyage) helps but makes Bobedi promise that he will not kill the perpetrator.

When the killer is revealed as OJ (Neo Ntlatleng), son of a man that Bobedi murdered horribly when he was a boy, a chain of vengeance is set in motion that threatens never to stop.

Writer and director Matabane, who clearly knows the terrain and understands the violence that is common in the townships, takes his camera into vivid locations. Ntlatleng, strung out and terrified, makes a credible killer and Chwenenyage’s boyish optimism contrasts nicely with Mokoena’s stern countenance that slowly gives off signs of second thoughts. Matshikiza makes a striking impression as the lovely murder victim and the loss of her vitality underpins the rest of the film.