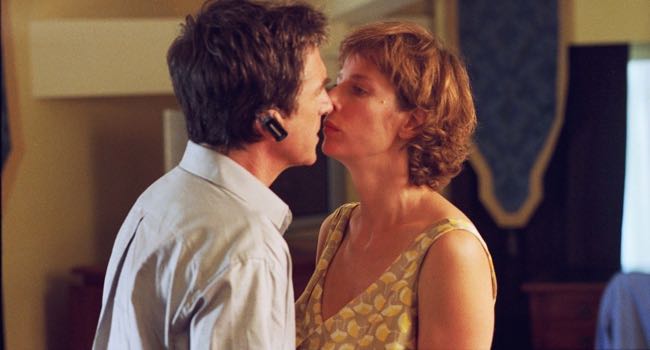 Shrewd and sophisticated, the tale of three couples dealing with the temptation of straying will appeal to audiences who like their adultery performed with Gallic flare. The film’s philosophy is summed up in a piece of dialogue: “You can love someone forever but not all the time.” It should fare well in art houses around the world.

Central to the story are performances of jazz standards by fictional singer Pauline Anderton whose promising career ended in a car accident in the 1970s. Portrayed in black-and-white footage by Catherine Olson, wife of director, co-screenwriter and costar Karmann, the late star’s singing inspires noted Parisian biographer Vincent (Andre Dussolier) to find out more about her mysterious death.

In the process, he meets aggressive television presenter Anne (Karin Viard) who would prefer to make a TV documentary exploiting the woman’s tragic end. Anne is not in the best state of mind as her marriage to easy-going Thomas (Karmann) is threatened by her lingering attraction to ex-husband Marc (Francois Cluzet) despite his new marriage to Anne’s close friend Caroline (Julie Dularme).

Vincent also is distracted by concern over his gay lover back in Paris but when he discovers there is a darker secret surrounding the singer’s death, Anne joins him on a quest for the truth although their searching is complicated by dalliances on all sides.

Karmann and co-writer Jerome Beaujour based their film on a novel by Stephen McCauley, which was set in New York and Boston and involved a deceased pop singer. Setting it in Paris and Lyons with a jazz flavor adds considerably to the story’s appeal and it plays out as good jazz should, aided by Pierre Adenot’s excellent score.

The acting is engaging throughout with Dussollier’s seen-it-all wisdom and Cluzet’s talent for appearing constantly distracted especially effective. Viard and Karmann deliver some of the best lines effectively including an exchange in which the errant wife admits, “There are things you don’t know about me,” to which her husband replies: “And that’s just fine.”