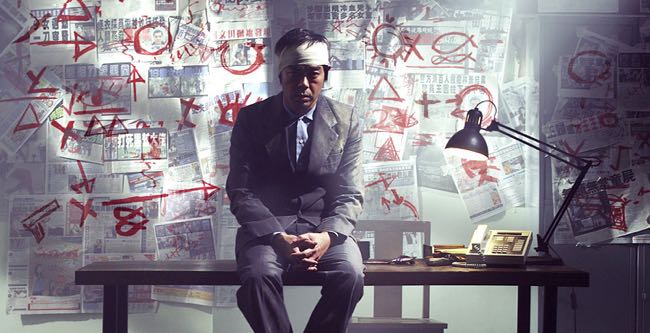 It’s already available on DVD, but I’ve been waiting for a chance to see “Mad Detective” on the big screen again since it was the surprise entry at the Venice International Film Festival last year.

The picture opens at the ICA in London today and I’ve already bought a ticket for tomorrow evening. Here’s how my review begins:

“Most really smart sleuths in crime fiction pick up on external clues, but the Kowloon cop in “Mad Detective” directed by Johnny To and Wai Ka-Fai, identifies villains by recognizing a person’s inner personality or personalities, as the case may be.

It’s a gift with serious complications because while his huge leaps of logic often lead to arrests, he loses grip of his mind and is fired from the police force. In the film’s taut, amusing and exciting story, he is brought back to help investigate the disappearance and possible murder of a fellow police officer.”