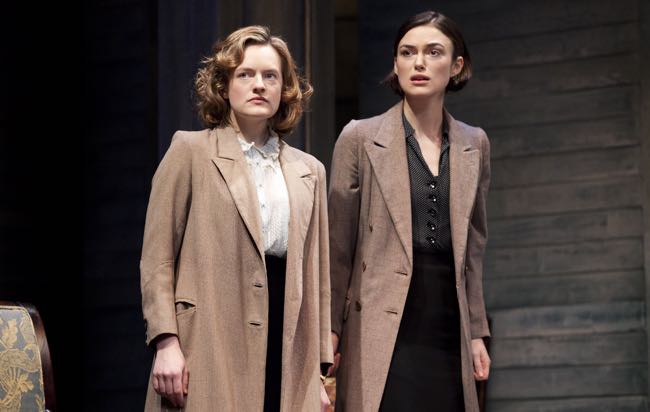 LONDON – Lillian Hellman’s 1934 Broadway melodrama “The Children’s Hour” shows its age in this new West End production, but it does afford screen stars Keira Knightley and Elisabeth Moss a chance to show they are just as much at home on the stage.

They play teachers who run a small private school for girls where a malevolent child makes a false accusation that is believed. The consequences are destructive in several ways.

Mary Tilford (Bryony Hannah) is a willful and manipulative piece of mischief who hates the school and wants to live with her doting grandmother (Ellen Burstyn). Punished for yet another duplicitous act, she runs away to her grandmother’s home and declares that she has seen and heard the teachers do “unnatural” things with each other.

This was powerful stuff in the 1930s, and a good deal of controversy surrounded the play through its 691 performances in New York. (It was made into a 1961 film with Shirley MacLaine and Audrey Hepburn also known as “The Loudest Whisper”.)

Hellman seems unable, however, to settle on whether the play’s focus is the way society loves to rush to judgment when fingers are pointed or on the ways that passion and jealousy affect friendship and love. The playwright opts to deal with both in melodramatic ways that suffer from being so obvious.

Karen (Knightley) and Martha (Moss) (pictured, left) are the closest of friends who have scrimped and worked hard to fulfill their dream of running the school and soon, Karen will marry her long-term doctor fiance Joe (Tobias Menzies).

The problem begins when Martha tries to get rid of her batty aunt Lily (Carol Kane), a failed actress who works at the school teaching elocution. In an angry confrontation before she departs, Lily lashes out and accuses Martha of having an unnatural affection for Karen and deep jealousy over her impending marriage.

Two students overhear this and soon tell Mary, who cannot wait to use it to her advantage. When she makes her scandalous claim, her grandmother accepts it at face value and withdraws her from school. Then she phones the parents of every other student, who do the same, and the school is closed.

Ian Rickson makes all this exposition less labored than it sounds, yet the melodramatics still creak. And while Hannah is a whirling devil of a child villain, the decision to make her habit for duplicity so obvious damages the production. It beggars belief that even a cloistered grandmother given sympathetic dignity by Burstyn would believe the girl.

Events transpire offstage as the teachers sue the old lady for slander but lose when Mary blackmails another student into supporting her and Lily cannot be found. The two women are left to pick up the pieces as both Joe and Martha begin to have second thoughts about the claim at the heart of the scandal, which leads to a contrived and unsatisfying climax.

The two leads succeed in adding depth to their characters, with Knightley poised and elegant as a woman unaware of her own appeal beyond that Joe loves her and Martha is a great friend. Moss makes Martha stiffer, still attractive but capable of holding back to observe with something like resentment the way her friend responds to her man. Menzies does well to convey how insidious suspicion becomes, and all three go beyond the words in the play to make poignant and memorable scenes of incomprehension and revelation.