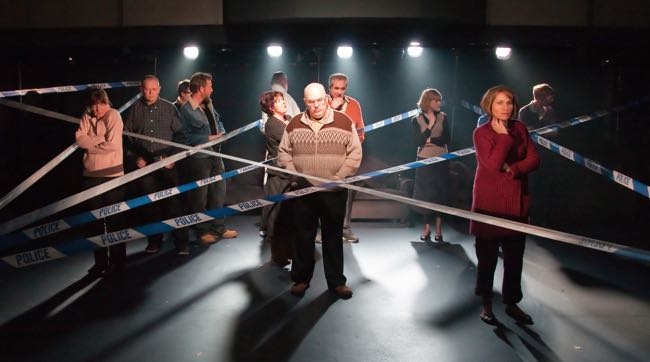 LONDON – “London Road” is a documentary musical about the impact of a serial killer on one community with words spoken and sung to match the original phrasing and cadence of people who lived where the murders took place. It sounds horrible but in the National Theatre’s production it is insightful, funny and moving.

Writer Alecky Blythe recorded conversations with scores of people who lived on London Road in the town of Ipswich on the English east coast following the conviction of a man who admitted to slaying five female prostitutes. She then worked with composer Adam Cork to edit them, find rhythms and patterns, and devise clever repetitions to set their words to music.

Cork’s music for woodwinds, guitar, keyboards and percussion ranges from sprightly to elegiac and adds greatly to the resonance of the production.

The performers never saw a written word but heard the edited individual recordings through earphones and were then required to duplicate them in speech and song with all the stops, starts, elisions and expletives that litter everyday remarks. The stage is often filled with all 11 performers, who play several roles, singing their own words, and then abruptly and melodically in unison. 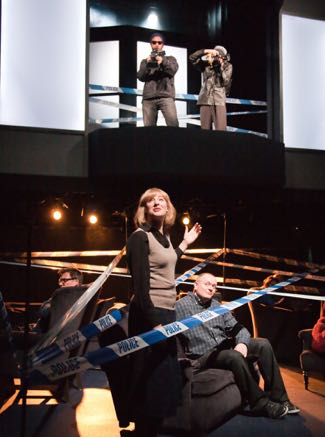 Director Rufus Norris and set designer Katrina Lindsay use simple props to show a community hall, people’s living rooms, the street itself where people lived in fear as the killings escalated, and outside the court where the convicted murderer was finally tried. A balcony provides the height from which the media – photographers, cameramen, reporters – can look down on the community, which is pretty much what they did, usually down their noses. A riveting scene shows police tape drawn to zigzag across the stage in all directions with the locals on their sofas suffocated by the fear of not knowing if the killer lives among them and the stress of the police investigation and all the press attention.

The action cuts back and forth from a meeting of folks who live on the street a year after the killer’s conviction to the first news of a murder in the community. Married couples, oldsters, single men and young women sing and speak of their increased terror as the number of dead bodies found grows to five with no suspect in sight.

“It Could Be Him” the girls sing, as their fear verges on hysteria and every man presents as a potential suspect: “You automatically think it could be him … that’s the scary thing, you know he could be amongst us …” In a pub, a man who gives every impression of being slightly weird, runs down the main characteristics of a serial killer: I, um … I, I, I have studied serial killers since my mid-teens. It doesn’t mean I am one but, er …”

When the suspect is arrested, the residents wake up to discover hundreds of police have taken over the street. “That’s When It All Kicked Off,” they sing. As the process of law takes its time, the media glare continues and those who live on London Road take offense at the way their home is always described as a red light district. The media types just comment that the locals still like to watch TV and read the papers: “They Like a Good Moan,” they sing.

Blythe has captured almost every side of the situation and the views expressed range from sympathy for the dead prostitutes to hatred of the killer to resentment over the fear and stress and even to one woman who says she’d like to shake the killer’s hand because he got rid of the sleaze.

Some in the audience will take a colorful show of flower baskets at the end to signify the street’s never-say-die spirit and powers of recovery while others might view it as denial. The cumulative power of Blythe’s work is non-judgmental and there are many genuine laughs along the way. One breathtaking sequence conveys the depth of the show. A trio of prostitutes sing mournfully about their trade and break off suddenly for a minute of perfect silence to remember the slain women.