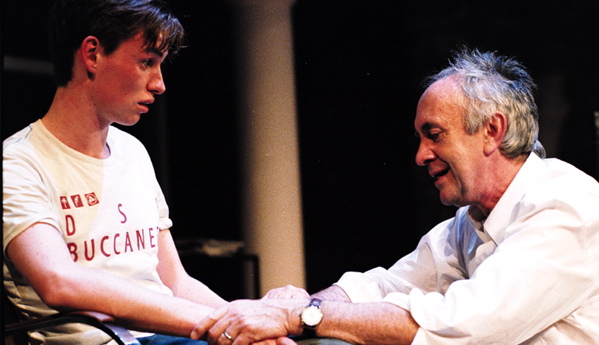 Eddie Redmayne and Jonathan Price in ‘The Goat’ at the Almeida PHOTO: John Haynes

Following a much publicized Broadway run, it is testament to the power of Edward Albee’s play “The Goat, or, Who is Sylvia?” and the conviction of this Almeida Theatre staging of it that the central character’s declaration that he has fallen in love with a goat retains the power to shock.

It says much too of the fine acting of Jonathan Pryce as the man in question and Kate Fahy as his understandably distraught wife. Few playwrights have captured the art of marital warfare as insightfully as the author of “Who’s Afraid of Virginia Woolf?” nor as wittily.

To take a sophisticated, cultured and hitherto happy couple and drop on them the one thing no husband and wife might reasonably expect takes nerve and a very steady hand. Albee has both and the sudden introduction of bestiality into a formerly happy home is both devastating and hilarious.

Had it been in “Monty Python,” Graham Chapman’s military censor might have yanked it as being “too silly,” but whereas the Pythons would have had their Billy Goat jokes and moved on to something completely different, Albee takes full advantage of the opportunity it provides to lay bare conventions, assumptions and a bizarre taste for the barnyard.

Inevitably, the jokes are wonderful and Pryce and Fahy render them delightfully but Albee’s getting at serious things here too and both performers are more than up to it. There’s good work also from Matthew Marsh as their friend Ross and Eddie Redmayne as their gay son Billy. Anthony Page’s direction is firm and direct, making excellent use of Hildegard Bechtler’s impressive Manhattan apartment setting.

Martin, the goat fancier, is facing his 50th birthday and a candid television interview on his successful career as an architect, but he fears his memory is going. Not for nothing does Albee make him a designer of the city of the future and then have him discover the second love of his life amid livestock out in the countryside.

At first, his wife is pleased to think that this Sylvia is at least not someone she knows and even when it begins to sink in that Sylvia has four legs and a beard, she’s relieved that she learned of it from a friend and not the NSPCA.

But Albee makes sure we know how much this woman loved this man. She didn’t fall in love with him, she says, she “rose to love him.” And even as the illusions crumble and the furniture starts to crash, each of them is likely to pause to admire the other’s delivery of cut or thrust. “That was good, by the way,” they’ll say after a sharp line. It’s Albee’s reminder that humor is almost always the only remaining lifeline. They know the price of their sophistication, however. “I wish you were stupid,” she says. “I wish you were stupid too,” he replies.

But they’re not and Albee doesn’t shrink from depicting the pain of unimagined hurt as they realize that something has broken that cannot be fixed. The point is that there’s no protection against the unexpected except to keep going. In “Monty Python” no one expected the Spanish Inquisition or a giant pig to land on them. It could just as well be a goat.