Richard Curtis in praise of ‘Animal House’ and sketch movies 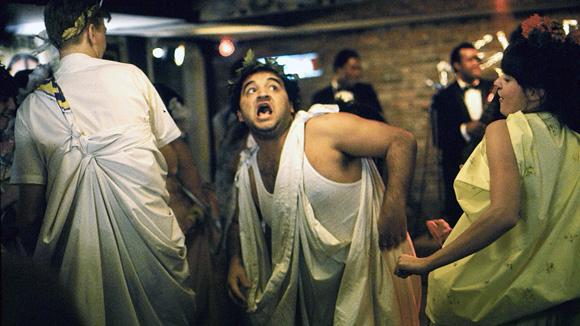 LONDON – Universal Studios has released many movies by British comedy writer Richard Curtis including “Notting Hill”, “Love Actually” and “Bridget Jones’ Diary”. No surprise, then, that he was asked to host a Grand Classics charity screening at the Electric Cinema as part Universal’s 100th anniversary celebrations.

Perhaps also it should not have been a surprise that from the studio’s vast range of pictures he chose “Animal House” (1978), which he called “a great cheerful American comedy” because it’s on his Rotten Tomatoes list of the five films he cannot live without.

Curtis slipped up in his introduction as Universal obviously had handed him a list of films it distributes on DVD. He said, “Universal made lots of good films, I know that now. I’ve got a list here”, and he cited ‘Citizen Kane’ – “the second greatest film of all time”, which was actually made at RKO, and ‘Duck Soup’ – “the greatest film of all time”, which was shot at Paramount.

Back on track, he said, “I think ‘Animal House’ is a fantastic movie, it’s one of my favourite films, or certainly it was the last time I saw it. I think it’s a part of a wonderful strand of movies that will never win any Oscars and yet will mean more to people and bring delight to people than many others.”

Curtis said “Animal House” is given the demeaning label of a “sketch movie” but it ranks in a tradition of films that are made up of small comic units timed perfectly. He cited “Duck Soup”, Jacques Tati’s films, the “Carry On’ series, movies by Woody Allen and Mel Brooks through the Monty Python films, which he noted are voted consistently as the greatest British comedies. He named “Airplane”, “The Naked Gun” and “Spinal Tap” through to “The Hangover” and “Bridesmaids”.

He said it was a strand of films that people love but don’t remember in the way they do sentimental romantic comedies such as “The Apartment” and “Some Like It Hot”. “But they make people the most happy, I think. ‘Animal House’ is a great example of films that are made by people dedicated absolutely to making every scene as funny as they can,” Curtis said.

The film is notable also as part of another US tradition, he said: “One of the great traditions of American cinema still thriving is its determination and ability to turn its TV stars and its comedians into movie stars. It always has done that and still does. My daughter and I were talking about this, and someone like John Belushi, his fantastic work on ‘Saturday Night Live’ would be pretty well forgotten were it not for his extraordinary work in ‘The Blues Brothers’ and ‘Animal House. They’ve done it with Steve Martin, Robin Williams, Kristen Wiig, Steve Carell … these people who are encouraged to go from television. Often, it takes a few failures to make it.”

He said that it had worked for some British comic actors such as Sacha Baron Cohen – “another maker of great sketch movies” – and Simon Pegg and Nick Frost: “I would always encourage everyone who works in the British film industry to look at the genius of some of the people that are on television and see if it can be turned into genius in the movies. I always felt that Rik Mayall was as good as Eddie Murphy and yet he never got to make movies in the same way that Eddie Murphy did.”

Of “Animal House”, he said: “It is incredibly well-cast and acted beautifully; everybody doing their finest work. Kevin Bacon has never been better. It’s edited beautifully, as far as I remember. Editing is much flashier in action movies. They give it an Oscar: ‘Well, it was a good fight’. But the fight to make jokes funny is as difficult as it is to make action scary,” he said.

“I particularly love the score of this movie. They were going to make the cheapest, tackiest movie they possibly could with the most amount of naked women they could get away with for a 15 certificate, and the person they asked to do the score was the single greatest composer in the history of Hollywood, a man called Elmer Bernstein, who had done ‘The Magnificent Seven’, ‘To Kill A Mockingbird’ and ‘The Great Escape. When you first hear the music you think that it must be the music from ‘Patton or something, so I would ask you to listen out for the score.”

Curtis praised the film’s director John Landis and said he was amazed to see that in the six-year period 1977-1983, Landis made “The Kentucky Fried Movie”, “Animal House”, “The Blues Brothers”, “An American Werewolf In London” and “Trading Places”. He said, “I don’t think anyone else has had such a comedy run in the history of the movies.”