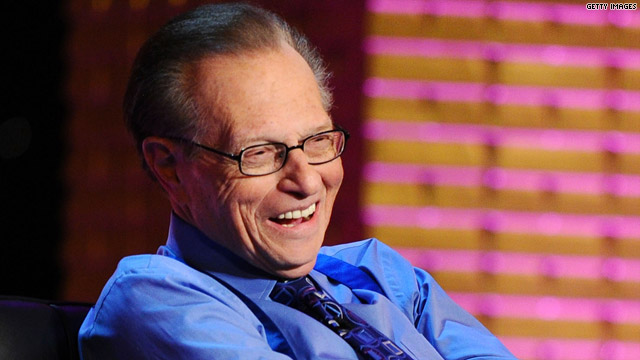 In fact, he had plenty of warnings but he ignored them. He said: “I was 54. I ate what I wanted and I smoked heavily. I knew my father died of heart disease. I knew I had a heart problem. I just never thought I’d be going into an emergency room.”

King’s career was on a roll. His primetime CNN-TV talk-show was a hit; he had a newspaper column in USA today; his radio show was heard on 326 stations; he toured the nation giving speeches; and he was making a reported $1 million a year.

After the heart attack, King quit smoking and in 1988, he founded the Larry King Cardiac Foundation, a Washington-based national organisation to which he has donated all his extracurricular income from the several books he’s written. It remains a thriving organisation that helps people with heart disease who cannot afford treatment.

In an interview I did with him in 1989 for Inside Books Magazine, he said his biggest fear back then was that he would start smoking again. Then Surgeon-General C. Everett Koop was King’s guest on CNN the night before his heart attack and his last words to the host before he left that night were, “Boy, you oughta stop smoking.”

King stopped cold turkey the very next day out of fear: “I smoked from age 16 to age 54 and I never thought I could stop until that heart attack. I’ve never smoked since.”

He admitted that he still thought about it: “You know, people give me great credit. I won a Lung Association award as a celebrity non-smoker, but to tell you the truth, if I hadn’t had the heart attack, I would never have stopped. I liked the feel of it, the taste of it. I didn’t wake up in the morning coughing. I didn’t hack. I wasn’t one walking around saying, ‘Jeez, these terrible things.’ I loved every drag I ever took.”

He worried that the desire for cigarettes would return: “I saw the movie ‘The Accused’ with Jodie Foster, who is terrific and who smokes all through the movie. They had close-ups of her smoking and I kept saying to myself, ‘God, I used to smoke just like she does, inhaled, held the cigarette, just like she does. I used to do that.’ And I wondered, ‘What if I wanted one?’ God, I wouldn’t know what I would do.”

It didn’t help that many of his friends and acquaintances smoked: “You know who loves smoking? Judge Antonin Scalia. I was with him last election night. He’s a chain smoker. Now, you’d think, hey, he’s a judge on the Supreme Court. I said to him, ‘Why do you smoke?’ He said, ‘Why do smart people do dumb things? I’ll tell you why – it’s a terrific habit!”

Actor Martin Sheen smoked even after the massive multiple heart attacks he suffered making “Apocalypse Now”, King said: “He comes to visit me; he still smokes. Now, either he’s some kind of fatalist or there’s something in his emotional makeup that makes him willing to roll the kind of dice that I’m unwilling to roll.

“I smoked as much as Sheen. I liked it but apparently not that much. I could stop. What I’m scared of is that I’ll be like Frank Sinatra. He told me he had stopped smoking for two-and-a-half years and he just started one afternoon. He was in the house, he was alone, there was a pack of cigarettes. He smoked Camels, unfiltered. He said he just lit one up and said, ‘Fuck it.’”