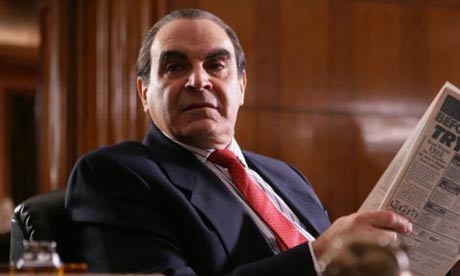 David Suchet (left), who is very good in the title role of the drama “Maxwell” tonight on BBC2 , says that he researched the life of Robert Maxwell for other characters he’s played.

He used the flamboyant businessman as the basis for playing Augustus Melmotte in Trollope’s “The Way We Live Now” in 2002. He told the BBC: “It was almost a carbon copy of Maxwell’s background, although obviously he was a different person.”

The actor says there’s no doubt that Maxwell was smart and tough but his colorful ways were missed when he was gone: “I think what’s great about the script, and why I was drawn to it, is that it doesn’t just present him as the big bully and evil thieving man that he’s probably made out to be now because he stole the pension funds for himself and such like. This drama doesn’t do that. That’s there and one judges it according to how you feel about that, but then his other life is there as well. I think there’s a very good mix of sensitivity and bullishness and what was later found out to be criminal activity.”

LONDON — Conrad Black, now on trial in Chicago, was not the first newspaper mogul to run afoul of the law. Robert Maxwell, owner of the big-selling U.K. tabloid the Daily Mirror, siphoned off £350 million from his company’s pension fund in 1991.

Thousands of employees lost their life savings. He was never tried because he fell off his yacht and drowned in mysterious circumstances aged 68 shortly afterwards.

Writer Craig Warner’s BBC film “Maxwell” tells of those last days although a line at the beginning points out that some characters are changed, dates are shifted and some scenes are informed fiction. Still, producer and director Colin Barr has delivered a penetrating drama observing the power-hungry CEO scheme and connive to keep the reins on his debt-ridden empire.

David Suchet (“Poirot”) creates a vivid impression of the uncouth and ruthless tycoon who got out of Czechoslovakia in World War II and fought bravely enough for the British to win the Military Cross.

His family perished at Auschwitz and he was penniless when he landed in Britain but he had a shrewd eye for business. At his peak, despite his nickname the Bouncing Czech, he competed with Rupert Murdoch as the most rapacious and successful media baron in the U.K.