Why Jon Stewart should listen to Johnny Carson 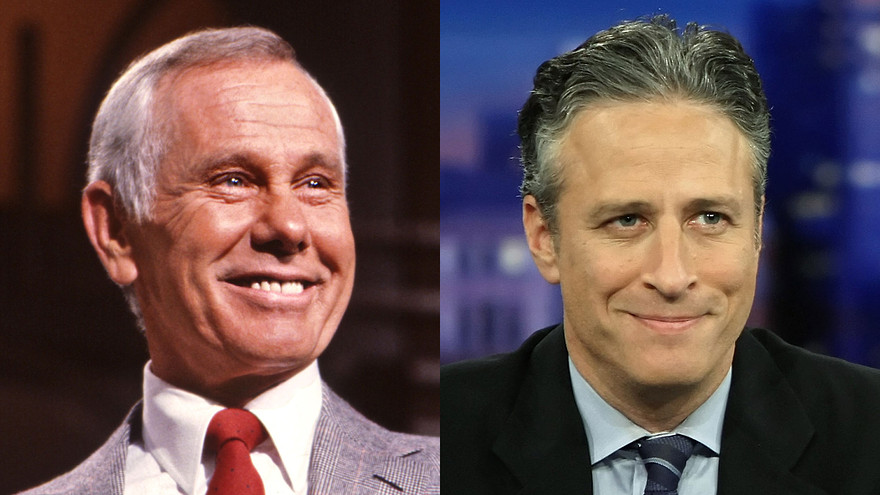 Count me among those who will hate to see Jon Stewart walk away from “The Daily Show” and I wish he could have heard what Johnny Carson told me about his own temptations to quit “The Tonight Show”.

Carson was the king of American late-night comedy when I interviewed him in his Burbank dressing room in 1981. “The Tonight Show” on NBC was starting its 20th year and it had made him, in his fifties, one of the biggest stars in entertainment. There were rumours, however, that he was restless and would pack it in, so I asked him about it.

Carson said, “I was thinking of quitting but I got a wonderful letter from the late Kenneth Tynan, who was a big fan of mine. It was very flattering. He said, ‘You know, Picasso didn’t do much besides paint. Yehudi Menuhin stuck with the violin and Fred Astaire was content to dance pretty much all of his life.’ What he was saying in effect was, ‘Stay on The Tonight Show, you really are fine at that and don’t figure that you must do these other things to prove something. There’s a certain validity in that.”

Carson remained on the show for another 10 years and finished his 30-year “Tonight Show” career on top, where he remains 10 years after his death despite a raft of imitators who challenged him then and have come along since.

Like Carson, Stewart is the best in the business, a beacon of comic sanity in a media landscape that is fragmented, impoverished, ignorant and often plain stupid. Now in his fifties, no doubt he looks at what Steve Carell, John Oliver and Stephen Colbert have achieved thanks to “The Daily Show” and he has become restless as he ponders what else might be out there. He made a creditable feature film directing debut last year with “Rosewater” and there’s no question that with his talents there could be much he would do well.

But the similarities with Carson go deeper. Like the late comedian, Stewart has built a fan base that relies on him for laughter, comfort and the occasional shock. When Jane Pauley was on NBC’s “Today” show from the 1970s through the 1980s, I was one of many who went to bed with Johnny and woke up with Jane.

Carson’s inimitable ability to connect with audiences is a gift that Stewart shares and it happens not only with viewers at home but also with the studio audience.

Carson told me: “I’ve never looked at ‘The Tonight Show’ as a talk show. I hate that appellation. To me, a talk show is William Buckley, Phil Donahue, Dick Cavett – they sit down and they talk. We do a variety show. The monologue, the sketches are an integral part of it. I’m an entertainer. I’m basically a comedian. I go out and I entertain. That’s what I like to do. Put me in front of an audience, I’m fine.”

Carson (pictured with sidekick Ed McMahon below) understood that he was a product of television and he knew that filmmaking was not for him: “It’s very boring to make motion pictures. I’m so used to the immediate feedback. I walk out in front of an audience tonight, I get the feedback. I like the live immediacy of television and concert work.”

He said it was faulty logic, anyway, to assume that performers skilled in one area would therefore be successful in another: “People say, ‘Why don’t you make a motion picture?’ Well, that’s like asking, ‘Why doesn’t Paul Newman work Las Vegas?’ First of all, he couldn’t work Las Vegas. Because you’re talented maybe in one medium doesn’t necessarily mean you can transfer that to another medium.

Carson recognized, too, that at that stage in his career, he was too well-known to play other characters. “See, I have played myself all these years. Jack Lemmon, in the early days of television, did a situation comedy and he went into motion pictures. He’s a superb actor but Jack didn’t play himself on television. He played a guy; he played a character. I have played Johnny Carson for so long that for me to walk on a major motion picture screen and have the audience accept me in a role is a very difficult thing to do. People say, ‘Oh, you can act’, and I’m sure I could do an adequate, maybe even a good job of acting. I haven’t seen anything yet that appeals to me that much that I want to say, ‘Oh, I must do this picture and become internationally known’. I might have 20 years ago, when I was younger, said, ‘Gee, that’s wonderful’. At my age now, I don’t have that drive for it.”

Carson’s farewell after 30 years was sad but inevitable. Stewart’s farewell, even as we wish him every success in whatever ventures he chooses, will seem sad and premature. Let’s hope he doesn’t miss the immediacy of “The Daily Show” the way Carson would have missed “The Tonight Show” because we will certainly miss him.

1 Response to Why Jon Stewart should listen to Johnny Carson