Terror in London: From joy to agony in a single day 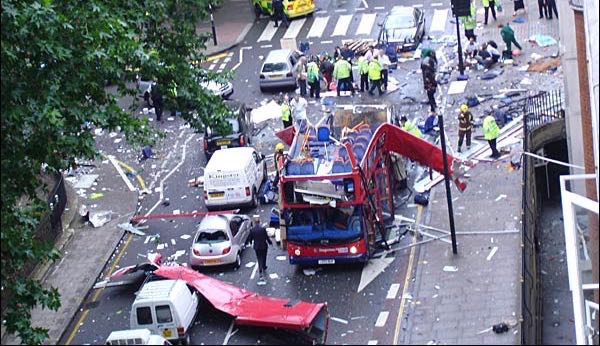 LONDON – It’s no great surprise in London when your local Underground station is closed. It’s a creaky old system and there’s never enough money, so you shrug and start walking. But on Thursday morning, Notting Hill Gate station was chained up and the guards were grim. “There’s been an explosion at Liverpool Street,” one said. “They think there might be more.”

On Wednesday, Trafalgar Square was giddy with people cheering and champagne corks popping as the news came through that the city had won the 2012 Olympic Games.

On Thursday, all you could hear were the sirens of police cars, ambulances and emergency vehicles. Most of London had gone to work as usual, even though it meant walking most of the way as first the Underground and then the buses stopped running.

I thought I’d be clever and take a circuitous bus route from Notting Hill to my office in the West End. It dumped us all off a long way short on Kensington Gore so I walked through Hyde Park to Piccadilly.

It seemed like business as usual except for the increase in sirens.

The news got worse as the day went on, but I work for a daily paper so we hit the phones and e-mail and filed our stories as most of the city began to empty.

By late afternoon, there was an eerie quiet in central London. All the West End theatres were closed Thursday and concerts by bands such as REM, Queen, Blue and Queens of the Stone Age were postponed.

At lunch in the Lamb & Flag, one of the venerable old pubs in Covent Garden, the woman serving the roast beef was consoling a family of Americans whose theatre date had been cancelled. “No rush, dear, we don’t close until 11,” she said.

With cellphone networks intermittent due to security requirements and land lines also affected, e-mails were zipping to worried loved ones and friends.

I was in Los Angeles at the time of the 1994 earthquake and it was extraordinary afterward how people were so solicitous toward each other. London was like that Thursday.

The thing with earthquakes is that you’re never quite sure if it’s really the big one. You always wait for aftershocks and that’s also true of London now. With the G8 conference in Edinburgh ongoing, there’s always the fear of worse to come.

Last Saturday, I spent 13 hours in Hyde Park at the Live8 concert, the most extraordinary musical event I’ve ever covered. It ended at midnight and with local transport closed down, many of the 200,000 people there walked home.

Tens of thousands of us walked in the dark past the Serpentine and up to Lancaster Gate, spilling onto the Bayswater Road where police officers made sure we could stroll home peacefully.

On Thursday, my walk through the lovely park had a different air. It took the old-timer selling the evening newspaper to shake me out of it.

“Never mind this lot, mate,” he said. “London’s been bombed by experts.”

(Ray Bennett is the European arts critic and a staff writer, based in London, for The Hollywood Reporter, the entertainment trade newspaper published in Los Angeles. He was a reporter and columnist at The Windsor Star from 1969 to 1977.)

This story appeared in The Windsor Star on Friday July 8, 2005.

This entry was posted in News. Bookmark the permalink.

1 Response to Terror in London: From joy to agony in a single day