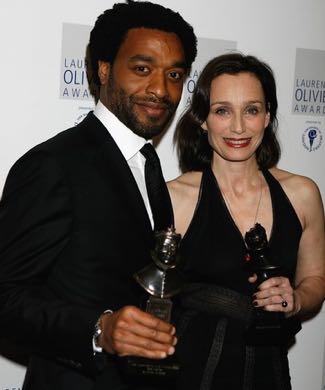 Ejiofor was named best actor for his title performance in “Othello,” while Scott Thomas took the actress prize for “The Seagull.”

With a record-breaking 11 nominations, “Hairspray” picked up with four prizes, including best new musical.

Ewan McGregor, who co-starred as Iago in the Donmar Warehouse’s hit production of “Othello,” was not nominated. Tom Hiddleston, who also was nominated for playing Cassio in “Othello,” won as best newcomer for “Cymbeline” at the Barbican.

Rupert Goold, who directed Stewart in “Macbeth,” was named best director, and Rory Kinnear won for best performance in a supporting role for the National’s revival of George Etherege’s restoration comedy “The Man of Mode,” which also won for Vicki Mortimer’s costume design.

Richard E. Grant hosted the ceremony at Grosvenor House, where Andrew Lloyd Webber received a lifetime achievement award. Presented by the Society of London Theatre since 1976, the prizes were named the Laurence Olivier Awards in 1984.