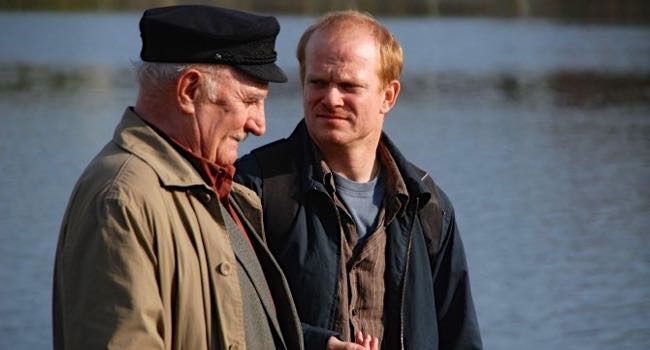 Paced leisurely but conveying rich characterizations with a contrasting subplot involving the younger man’s girlfriend and a son he never knew, the film will be well received in art houses and on the festival circuit.

Josef Somr, as the dad, and David Novotny, as the son, work considerable magic as they banter and tease each other on the day they spend together every three weeks. Mum died many years ago after taking the boy and marrying a Bolshevik numbskull during Czechoslovakia’s Soviet domination.

There are still secrets to be shared about what happened, though, as forgotten resentments resurface while the two of them wander through the streets and parks of Prague. Somr can switch quickly from being stern to openly affectionate while Novotny’s tough-guy looks mask a sympathetic vulnerability.

The womanizing son and the lonely father share tall tales about fatal women and nasty ailments that they know will spark a reaction in the other. Finally, the son reveals that an old girlfriend has informed him that he fathered a now-grown boy and while he frets over being a father, the old man contemplates being the grandfather he never expected to be.

Meanwhile, the younger man’s current girlfriend is visited by the newly discovered offspring and since he resembles her lover closely only being 20 years younger, their meeting becomes increasingly complex.

Based on a novel by Emil Hakl, the film is necessarily episodic but thanks to sturdy filmmaking, some very funny moments and fine performances, there is a growing attachment to the characters and being with them feels like time well spent.