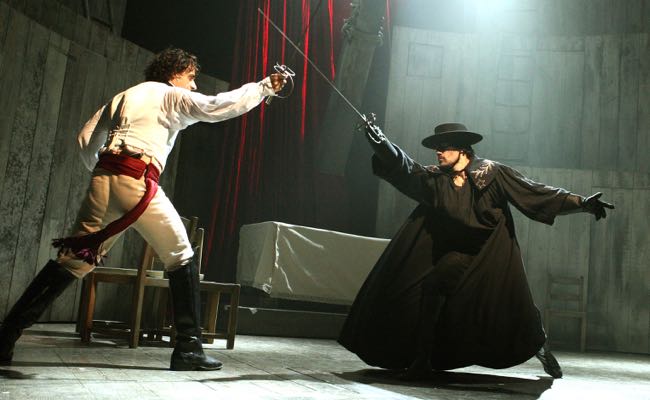 LONDON – A musical version of the saga of the Spanish Californian hero with the mask and deadly sword sounds like a commercial bridge too far but “Zorro the Musical”, with songs by the Gypsy Kings, is a pleasure and a half.

The music is irresistible, the performances are witty and the voices are lovely. The classic tale of a young man who hides his identity in order to defend the oppressed is a familiar tale but it is carried off with such dash and devil-may-care that even the clichés raise a smile. 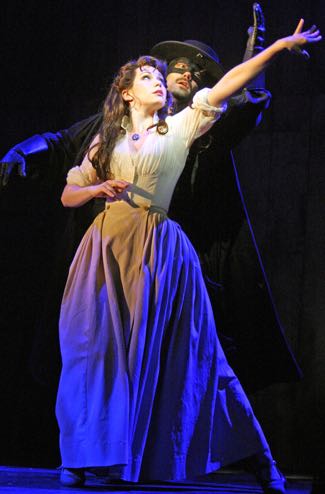 Returning from a sojourn in Europe, carefree Don Diego (Matt Rawle, pictured top with Adam Levy) returns to California with a gypsy troupe including the bewitching Inez (Lesli Margherita) expecting to find things pretty much the same as when he left. But his Spanish noble father has been drummed out and now Diego’s childhood friend Ramon (Levy), who has become a tyrant, is in charge.

Not only must Diego find his father but he must also fight for the hand of his childhood sweetheart Luisa (Emma Williams, left with Rawle), who also is the object of Ramon’s lust.

It’s simple stuff but on Tom Piper’s splendidly evocative set and with swift and winning direction by Christopher Renshaw, Stephen Clark’s savvy book and lyrics carry everything along in fine form.

Choreographer Christopher Renshaw employs every Spanish form of dancing and gets a large and talented ensemble tapping every toe and stamping every boot-clad foot. It’s stirring stuff, building on the excitement generated when the Gypsy Kings perform.

Rawle, who starred as Che in the hit West End revival of “Evita” a couple of years ago is a terrific Zorro, playing him a rascal as much as a hero, and Levy is a very convincing heavy.

Williams, who was Truly Scrumptious in the original West End cast of “Chitty Chitty Bang Bang” and had the title role in the ill-fated musical version of “Desperately Seeking Susan”, has a voice to match her radiant looks and Margherita raises the temperature with her flamboyant singing and dancing.

Musicals these days don’t seem to produce songs that succeed beyond the stage and that’s true of “Zorro,” but all the numbers are tuneful and the sweep of their presentation and the wonderful cast make it all work. 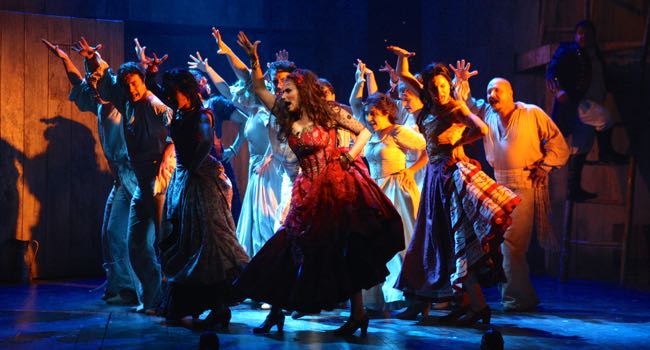