LONDON – Richard Curtis’ new comedy “The Boat That Rocked”, about the pirate radio stations that sprang up briefly in the United Kingdom in the 1960s, is like a long, slow cruise where all the fun is in the exotic ports of call but life on board is pretty dull.

Many great pop songs from that era make up the stops along the way and whenever an old favorite breezes along the film draws on its energy. But it’s far too long and, between the tracks, the episodic adventures of a group of disc jockeys broadcasting rock ’n’ roll from a rusty old clunker anchored just beyond the three-mile limit from the British Isles is heavy going.

An infectiously nostalgic soundtrack and likeable performers including Philip Seymour Hoffman, Bill Nighy and Rhys Ifans plus a sentimental and upbeat ending will take the picture beyond the box office shallows but it’s unlikely to prove as bountiful as previous Curtis creations such as “Love Actually” and “Notting Hill”.

The film sets the scene  quickly in the mid-1960s when British rock was exploding but the BBC was bound contractually to produce live music so pop records barely got a look in. Set almost entirely onboard the fictional floating broadcast ship Radio Rock, the comedy is drawn from the frat-boy relationships of the eclectic gang playing the records.

Nighy, as the station’s debonair owner, Hoffman as the token boisterous Yank known as the Count, and Ifans as a deejay superstar named Gavin, provide the film’s best moments with typical flare.

Young English actor Tom Sturridge does well as Carl, the owner’s godson, whose arrival provides the means of introducing everyone. Some of the best moments involve arrivals on the ship including Ifans’ and one that features a cameo by Emma Thompson who looks ravishing. 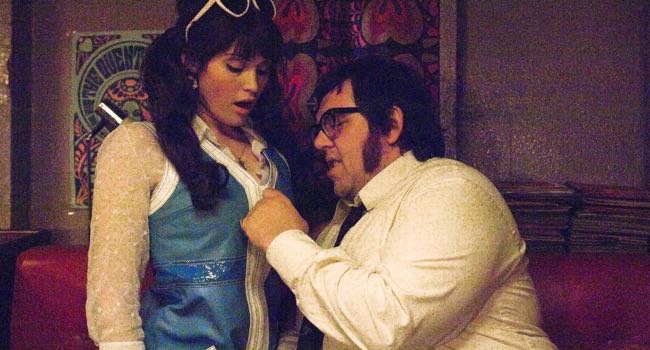 There’s a bit of a plot that involves Carl as he tries to find out which of those on board is his long-lost father but mostly it’s a series of set pieces with games sparked by various rivalries. One results in the Count and Gavin climbing aloft to see who chickens out first.

It’s lame stuff and it doesn’t help that Curtis gives the women names that play directly into hit songs so cue Leonard Cohen’s “So Long Marianne” and the Turtles’ “Elenore.” Frequently, the film becomes simply a music video that involves the whole cast although one London pub-crawl sequence looks like the cheesiest Fab Four frolic.

The vessel leaks each time it cuts to scenes of the delirious British public intoxicated by the miracle of rock ’n’ roll. It starts to list seriously during several dry-land scenes in which Kenneth Branagh hams mercilessly as a prissy government minister with an assistant named Twatt who is determined to shut the pirates down.

The real pirate radio ships, whose days ended in 1967, wound up being towed away for salvage but the film avoids that fate, like the best rock songs, with a rousing finish and a pleasing climax.