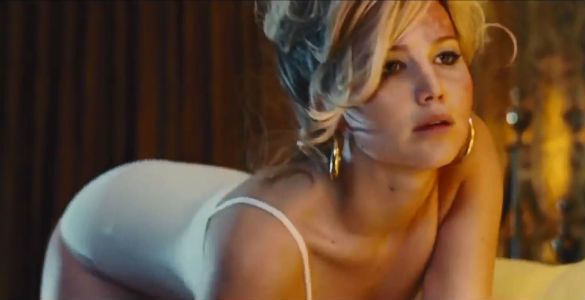 Walt Disney’s “Frozen”, which opened in UK cinemas on Dec. 6, won the prize for best animated feature and “The Great Beauty”, now on Blu-ray and DVD from Artificial Eye won as best foreign language film.

Cate Blanchett won as best actress in a drama for “Blue Jasmine”, due on Blu-ray and DVD from Warner Home Video on Feb. 17 while Matthew McConaughey was named best actor in a drama for “The Dallas Buyers Club”, which eOne will release in UK theatres on Feb. 7.

Amy Adams won the best comedy actress prize for “American Hustle” with Leonardo DiCaprio as best comedy actor for “The Wolf of Wall Street”, due in cinemas from Universal Pictures on Jan. 17. Jennifer Lawrence (pictured) won as best supporting actress for “American Hustle” and Jared Leto was named best supporting actor for “The Dallas Buyers Club”.

Alfonso Cuaron won as best director for “Gravity”, which Warner Bros. released here in November and is expected on Blu-ray, DVD and UltraViolet next month. Director Spike Jonze claimed the screenwriter award for the futuristic comedy “Her”, which Entertainment will release in UK theatres on Feb. 14.

In the Golden Globes TV awards, crime show “Breaking Bad” was named best drama with Bryan Cranston named best actor in a TV drama. The complete box-set of the cult hit is available on Sony Pictures Home Entertainment. “Brooklyn Nine-Nine” , which debuts here on E4 on Jan. 16, won as best comedy series and Liberace biopic “Behind the Candelabra”, which is available on Blu-ray and DVD from eOne, won the best prize for best miniseries or TV movie. Star Michael Douglas was named best actor in a miniseries or TV movie.

Elisabeth Moss won as best actress in a miniseries or TV movie for mystery “Top of the Lake”, which is available on disc from 2Entertain. Robin Wright won as best actress in a drama for “House of Cards”, which is on Blu-ray and DVD from SPHE with Season Two due on Netflix next month. Andy Samberg was named best actor in a comedy series for “Brooklyn Nine-Nine” while Amy Poehler won as best comedy actress for “Parks and Recreation”, seen here on BBC Four and available on disc from Fremantle and Fabulous Films.

Supporting prizes for a miniseries or movie went to Jacqueline Bisset for “Dancing On the Edge”, on disc from ITV Studios Home Entertainment, and Jon Voight for crime show “Ray Donovan”, which airs here on Sky Atlantic and is due on Paramount Home Entertainment.

Best Actor in a Motion Picture, Musical or Comedy
Leonardo DiCaprio, The Wolf of Wall Street

Best Miniseries or TV Movie
Behind the Candelabra

Best Actress in a Miniseries or TV Movie
Elisabeth Moss, Top of the Lake

Best Actor in a Miniseries or TV Movie
Michael Douglas, Behind the Candelabra

Best Supporting Actress in a Series, Miniseries, or TV Movie
Jacqueline Bisset, Dancing on the Edge

This entry was posted in Film, News and tagged Golden Globes. Bookmark the permalink.