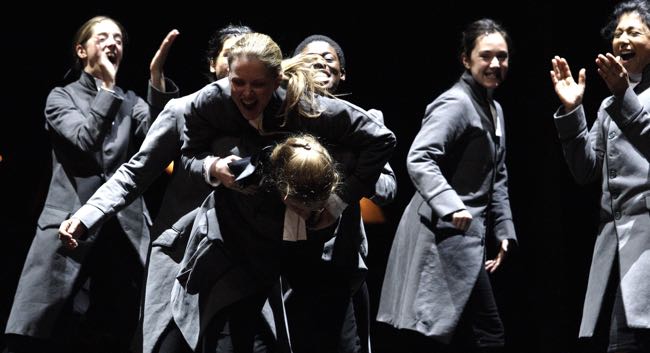 LONDON – The National’s production of “Corum Boy” is the most thrilling, moving and intoxicating piece of theater since the last time it adapted a children’s book for grown-ups, Philip Pullman’s “His Dark Materials” almost two years ago.

The play, by Helen Edmundson, is based on Jamila Gavin’s Whitbread Children’s Award-winning novel about an evil trade that developed in 18th-century England exploiting the goodness of philanthropist Thomas Corum, who established a shelter for unwanted children.

There is Dickensian complexity and Shakespearean coincidence in the story that tells of a talented young musician, his beautiful sweetheart, her secret pregnancy and the ruthless villain she turns to for help. Filled with the music of Handel, sung by girls playing boys, and staged with extraordinary flourish and more than a touch of theatrical magic, the tale is rendered with captivating sweep and style.

It tells of Alexander Ashbrook (Anna Madeley), a gifted singer who desires only to make music but whose father demands that he follow in his footsteps to manage the family estate. Determined to pursue his dream, Alexander runs away leaving his sweetheart Melissa (Justine Mitchell) not only distraught but also, unknown to him, pregnant.

In her desperation, Melissa takes advice from the Ashbrooks’ knowing housekeeper, Mrs. Lynch (Ruth Gemmell) and turns to a man named Otis Gardiner (Paul Ritter) who assures her he will deliver her baby to the shelter of Thomas Corum.

Gardiner, however, is in the vile business of baby killing. Using his addled son Meshak (Jack Tarlton) as helpmate, he murders the infants and buries them on the Ashbrook estate. Only this time, he has not counted on Meshak’s feelings.

The simple boy has taken Melissa as his angel and knowing the baby is hers, he keeps it from death and delivers it instead to Corum. Gardiner’s crimes are uncovered and he is charged with murder, but the lives of all involved remain entangled until events years later provide resolution.

Playwright Edmundson and director Still achieve marvels with broad strokes and incisive scenes. Still also designed the production with Ti Green and on the vast Olivier stage it becomes convincingly a cathedral, a mansion, a ship and, in one extraordinary drowning sequence, the deep blue sea.

Some sequences are very dark as they depict mothers grieving for their lost babies, those babies being found as the most poignant of corpses, and other youngsters being carried away to slavery. It is the stuff of nightmares but has its place as a malign contrast to the kindness and goodness that infuse the story.

The use of girls to play boy choristers works very well and the acting and singing are splendid throughout. Madeley is remarkable as the young Alexander and later his son, Aaron, and Bertie Carvel becomes the grown Alexander in a seamless piece of stagecraft.

Tarlton has the most difficult part in a role that requires him to be onstage at the periphery but always in character and worth turning to without upstaging the action, and he does it wonderfully well. Mitchell is a charming angel and Gemmell makes a shrewd and doughty conspirator in iniquity as Mrs. Lynch. Ritter’s villainy is sly and persuasive, and not over when you think it is.

The music is sumptuous as it carries the mood and pulse of the story all the way through to a bold and utterly pleasing finale in which the entire cast performs Handel’s “Messiah” and leaves the audience that has been moved to tears now beaming.