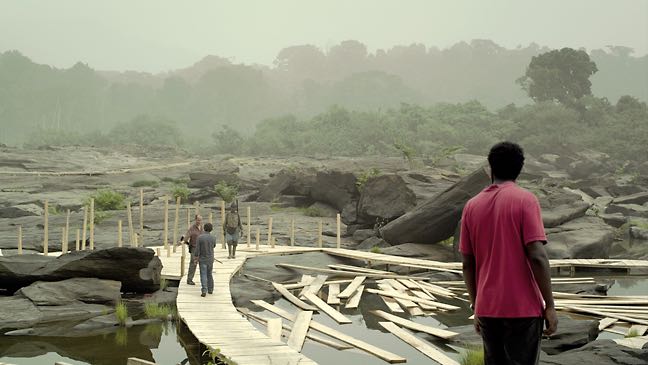 BERLIN – Ulrich Kohler’s uneven Competition film “Sleeping Sickness” contrasts the relationship that two doctors – one a white German, the other a black Frenchmen – have with Africa but it lacks a clear point of view.

The story is really about one white man’s fatal attraction for the fabric of life in the rivers and jungles of Cameroon with a surrealistic touch at the end. Much of it is filmed at night, however, and little attempt is made to show why he is so taken with the place. Prospects home and abroad appear slim.

Pierre Bokma plays Dr. Ebbo Veltman, whose long-term program intended to combat sleeping sickness has been so successful that it risks losing the funds that keep it going. His wife Vera (Jenny Schily) is keen to return to Germany and their daughter Helen (Maria Elise Miller) has lost interest in Africa after two years at home in boarding school.

A transition is in the works with another doctor set to move in to his hospital and so Veltman’s wife and daughter return to Germany while the doctor wraps things up.

At this point, the film abruptly skips some years and changes point of view with the introduction in France of young Dr. Alex Nzila (Jean-Christophe Folly), who is despatched by the World Health Organization to Cameroon where Veltman has continued to operate.

Urban, gay and very French, Nzila finds the clinic in disarray and Veltman absent. The epidemic of sleeping sickness appears to have been beaten but Veltman has become more eccentric and conflicted over his love for the place.

He relates a story about a doctor who was killed by a hippopotamus although that animal is rarely seen in the vicinity. He explains that locals were convinced the hospital director had transformed himself into a hippo in order to kill the man because he had been sleeping with his wife. Then he invites Nzila to go out hunting at night.

There is little suspense, though, and only a touch of comedy in the urban doctor’s discomfort in the jungle, which Folly handles well. The film touches on issues that complicate aid to African nations and what happens to funding from non-government organizations, without really addressing either topic.

Bokma looks at home amid the luxuriant undergrowth and he has the air of a man well used to navigating corrupt officials, greedy men in uniform and the reality that native clothes are made in China.