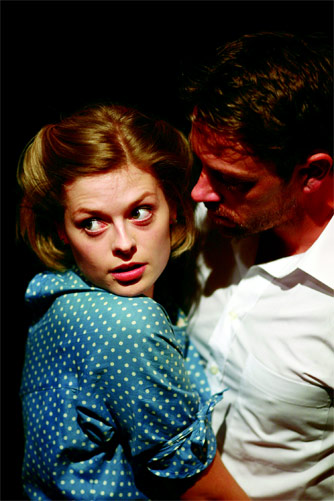 LONDON — Charlotte Salomon was a young German Jewish woman who perished at Auschwitz in 1943 but who left hundreds of paintings that describe a short life lived in the shadow of the Nazi terror.

Candida Cave’s riveting new play, “Lotte’s Journey,” in its world premiere at London’s New End Theatre, portrays the sparking of her talent and the harrowing passage towards death in the Holocaust.

Set in a crowded cattle car ostensibly on its way from the French Riviera to a Jewish “settlement” in Poland, the play flashes back to Charlotte’s childhood in Berlin and adolescence with her grandparents on the Cote d’Azur.

Salomon made hundreds of gouaches – notebook-sized paintings with heavier pigmentation than water colours – to which she added descriptive words and musical clues to provide a narrative. She called her collection “Life? or Theater?” It was discovered in Amsterdam in the 1970s by history professor Mary Lowenthal Felstiner, whose subsequent book made the works famous. A 1981 film title “Charlotte” by Dutch director Frans Weisz, starred Birgit Doll as the title character and Derek Jacobi as her lover.

In the new play, Cave traces the development of Charlotte’s striving for creative freedom as an escape from the perilous times. Selina Chilton (pictured) is outstanding as the young painter, capturing her youthful innocence as well as the growing steel that sees her through to adulthood as an exceptional artist.

The rest of the cast, in multiple roles, do well too. James Pearse and Elizabeth Elvin makemuch of quite different characters; Dominic Power (pictured) is strong as a journalist and Charlotte’s lover; and Ben Elliot is downright scary as a pitiless Nazi guard.

On the small New End Theatre stage, efficiently cleverly by designer Lotte Collette with the cramped cattle car on the left and an open space for flashbacks on the right, the story plays out to increasing horror. David W. Kidd’s shrewd lighting design helps enormously to establish credibility.

As the story unfolds, the setting moves back and forth to Berlin with Charlotte as a child as the Nazi menace grows. Scenes depict her doctor father suffering from the new regime, her deeply troubled mother struggling for mental balance, and a new stepmother, an opera star, who encourages the girl’s artistic endeavors.

Charlotte falls in love with her stepmother’s vocal coach, Amadeus Daberlohn, but they are wrenched apart as she is returned to the south of France. There, the truth of her mother’s death is revealed, not from influenza but suicide. Her demanding grandfather relates the entire grisly family history in which every woman has died by her own hand.

That frightening legacy is the impulse that drives Charlotte as she begins to paint, evidently choosing life over death, although as the cattle car continues on its inexorable track, the play raises even more haunting questions.