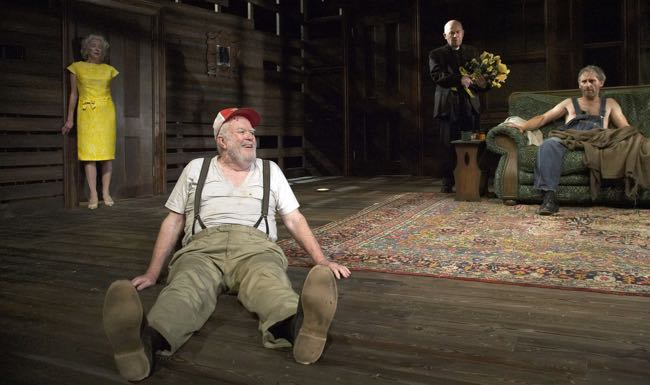 LONDON – A sheet of rain fades to the coyote howl of a guitar and in a rundown farmhouse an old man on a couch coughs, reaches for his whiskey and resumes a shouted conversation with his offstage wife.

The decay, discord and disharmony set the scene for one of playwright Sam Shepard’s finest examinations of how families can eat themselves up with secrets and lies.

Crackling with intrigue and seared with menace, Shepard’s 1978 Pulitzer Prize-winning play is propelled vividly by an excellent cast led by veteran character actor M. Emmet Walsh (pictured above) as Dodge, the ageing ringmaster of a mid-Western familial circus of horrors.

There is a knock on the door and out of the rainy night comes handsome young Vince (Sam Troughton) and his sparkling girlfriend Shelly (Lauren Ambrose). Vince says this is where he grew up and he just stopped by on his way west to find his father.

But Dodge says he doesn’t know the boy, and he gets no warmer welcome from his grandmother, Halie (Elizabeth Franz).

It doesn’t get any better when Tilden (Brendan Coyle, pictured below with Ambrose), Vince’s dad, turns out not to be in New Mexico but right there although he, too, is barely acknowledged by anyone other than brother Bradley (Sean Murray), who mostly wants to beat him up. 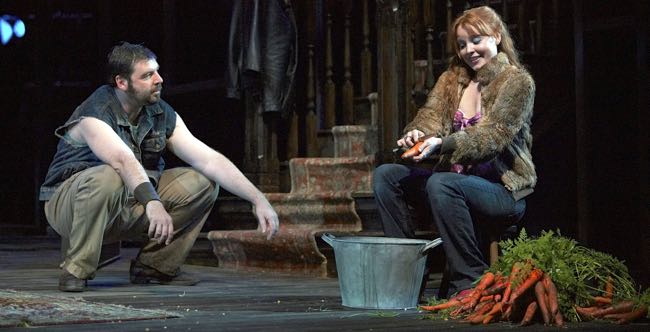 Eager to please, Vince disappears into the night to fetch more whiskey for Dodge but that leaves newcomer Shelly to deal with some mighty odd characters who might or might not have something nasty in mind.

In Shepard’s sinewy tale, however, the members of this strange family keep their nastiness mostly to themselves. Tilden is the shell of a football player as his simple mind wanders to a garden that no longer exists but still allows him to enter with armfuls of carrots or corn on the cob. Bradley is burning up with an anger he directs happily at any one and Shelly soon learns that it’s safer when he’s separated from his artificial leg.

Left to fend for herself, Shelly grows in strength and it’s her prodding that helps peel back the hidden layers of the family’s history. By the time Vince shows up again, all the skeletons, including the one implied by the title, are there to see.

Walsh renders his snarling old man with all the savvy you’d expect and Ambrose (from “Six Feet Under”) is a revelation, playing Shelly with great charm and fiery spirit.