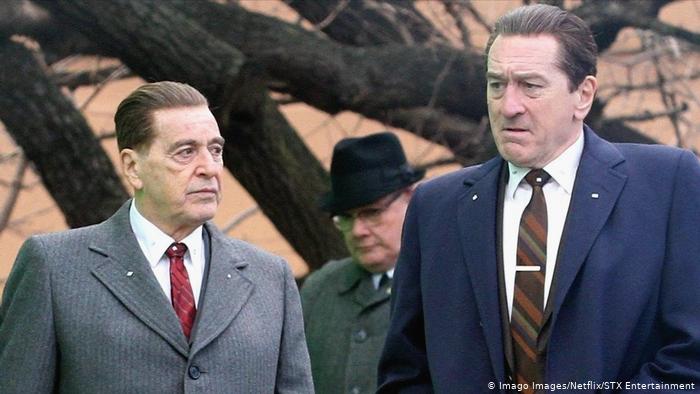 Over nearly three-and-a-half tedious hours, he takes a hoodlum named Frank Sheeran (Robert De Niro, top with Al Pacino) at face value as he makes dubious and unsupported claims about the number of men he murdered including the disgraced union mobster Jimmy Hoffa.

The corrupt head of the International Brotherhood of Teamsters, Hoffa went missing in 1975 and was declared dead in 1982. The film is based on the 2004 book ‘I Heard You Paint Houses: Frank (The Irishman) Sheeran and the Closing of the Case on Jimmy Hoffa’ by Charles Brandt.

Oscar-winning screenwriter Steven Zaillian (‘Schindler’s List’) wrote the script for Scorsese’s film but it’s just a long and boring litany of alleged murders by a loathsome creature with no character or personality. The film establishes Sheeran as a war criminal in combat in Italy in World War II and shows him as a thief happy to rip off his boss’s beef from the truck he drivers. That leads to employment with gang leader Russell Buffalino (Joe Pesci, below left)) for whom he murders without conscience. 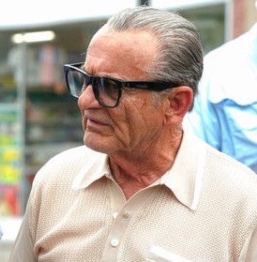 Rather than show all the killings, which might serve to remind viewers of the worthlessness of his central character, Scorsese freezes the frame every so often and sticks a label on a man with details of when and where he was gunned down. Then he has a montage of Sheeran throwing a weapon into a river, further distancing him from the crimes.

Mario Puzo invented mob lingo out of whole cloth for ‘The Godfather’ but Scorsese just has a couple of lines to work with. It’s embarrassing watching Al Pacino try to say with a straight face, “I hear you paint houses” … meaning he spills blood when he kills people … and De Niro reply, “I also do my own carpentry”, which means either that he cleans up after himself or he makes coffins, it’s not clear.

The film uses a CGI technique intended to make the aging actors look younger but it’s a pathetic joke. The procedure trims some fat from their heads and smooths out the wrinkles but it does nothing to obscure their geriatric body language. There’s a laugh-out-loud moment early on when Sheeran first meets gang leader Buffalino who calls him “Kid” when he’s clearly old enough to collect his pension.

The director drags in Pesci, one of the screen’s great hams, but gives him no scenery to chew on. He wanders about looking like a creepy uncle with no hint of the menace that supposedly keeps the killer and many other villains in thrall. De Niro chews the cud and grimaces a lot, as usual, and makes no attempt to suggest anything Irish about the character.

Al Pacino is miscast as the big and blustery Hoffa and he wanders about like a cheery uncle going on constantly about “my union’, whose reputation he blackened by selling out to mobsters. 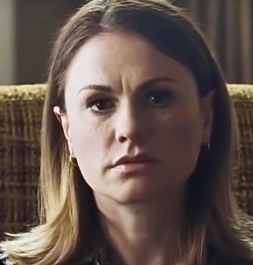 The only interesting character in the film has barely any screen time. Anna Paquin (left) plays Sheeran’s daughter Peggy who  observes his cruelty as a child and grows up to revile him. Shrewdly, editor Thelma Schoonmaker includes a lengthy and wordess close up of Paquin as she stares at her father and conveys the woman’s pain and disgust. A film about how she managed to become a decent person growing up in the home of an unregenerate murderer might make a good film.

Scorsese makes it clear that Sheeran is a psychopath with not a shred of empathy for others or contrition over his supposed crimes but still he tries to humanise all of the criminals by showing them in family situations and religious ceremonies. He even tries to engender sympathy for Sheeran as he nears the end of his life and contemplates mortality although only for himself, never for anyone else

“As far back as I can remember, I always wanted to be a gangster,” Henry Hill says in ‘Goodfellas’. Judging from his adoring films, it’s pretty clear Scorsese did too.