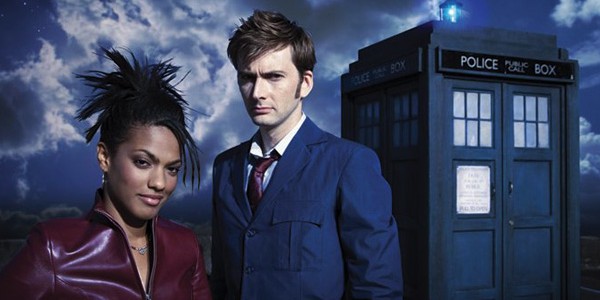 One of the pleasures of the reinvented “Doctor Who” series, returning at 7 o’clock tonight on BBC1, is that the words are as much funs as the visuals.

Writer Russell T Davies has done a dandy job on the show and David Tennant brings great flair and charm to the title role. He gets a new sidekick tonight as Freema Agyeman (pictured with Tennant above) joins the series as the smart and lively Martha, who is almost a doctor herself.

The Time Lord checks into the hospital where Martha works just in time for the entire building to be warped onto the moon in a plot involving monstrous aliens and a particularly nasty plasmavore who sucks the blood of humans through a straw.

With typical wit, the plasmavore comes in the form of a little old lady, Florence Finnegan, played by Anne Reid, and while she needs to refuel in order to obscure the fact that she is not human, she has no taste for it. As she aims her straw at a well-upholstered medical consultant, she sniffs, “Blood full of salty fats and vintage wines, and all those Michelin star sauces!”

The doctor gets to kiss Martha in the first show in order to make a genetic transfer, whatever that is, and he assures her: “It could save a thousand lives. It means nothing.” But it’s a smacker that leaves her gasping: “That was nothing?”

The Bard shows up on April 7 in the second episode with the cheeky title “The Shakespeare Code.” Gareth Roberts’s clever teleplay sends the time traveling Tardis back to Elizabethan times where three witches plan to use one of Shakespeare’s plays in order to take over the world.

Christina Cole has great fun as their leader, Lilith, a witch who alternately is beautiful and hideous. As she draws a gullible suitor into her lair, she leers: “Would you enter?” He pants: “I would.”

The sly dialogue continues as Martha views the witch’s brew of magical effects and says: “It’s all a bit Harry Potter.” To which the doctor replies: “Wait until you read Book 7! Oh, I cried.” He tells Shakespeare (Dean Lennox Kelly) to rage against the dying of the light but when the playwright’s ears perk up, he says, “No, it’s somebody else’s.”

Will takes a fancy to Martha but when the doctor insists “We can have a good flirt later,” the poet eyes him and says, “Is that a promise?” The time traveler shakes his head, “Ah, 57 academics just punched the air.”

If the rest of the 13-part series is as entertaining as the first two, then “Doctor Who” fans are in for a treat. As the doctor tells Shakespeare: “The play’s the thing. And yes, you can have that one.”