Why Frank Sinatra was called The Voice 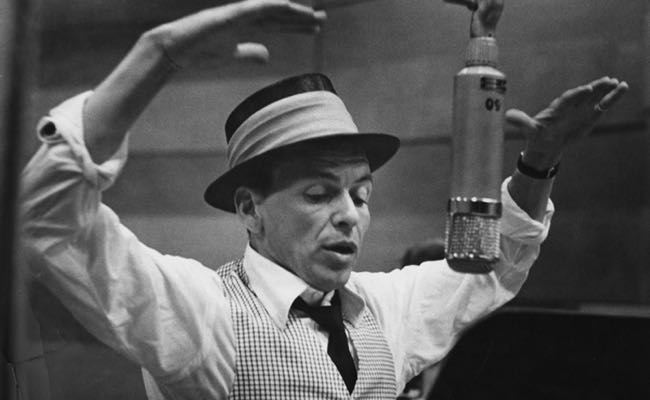 There were several reasons why Frank Sinatra, who was born 100 years ago today, was known as The Voice. In 1992, Daily Variety gave me the chance to research just how he earned the sobriquet.

British biographer Robin Douglas-Home said Frank Sinatra’s voice sounded like “a mouthful of Chateau Mouton Rothschild ’49 chased by a teaspoon of celery salt and a sprinkling of cayenne pepper or a teaspoon of Hymettus honey washed down with the driest of dry martinis”.

Whitney Balliett observed in The New Yorker that the voices of popular American singers tended to be home-made and friendly: “Their voices, which rarely have much coloration, are a complex mixture of cheerful intent, emotion, electronics and bravado. But the popular singer’s lack of technical aplomb is his great virtue.”

The vocal style was called crooning and musical scholars saw it as a return to the bel canto ideal of 16th century opera, a moderated and subtle delivery distinct from the belting grandiosity displayed by modern opera singers.

Balliett argued that while opera singers over-sang popular songs, crooners under-sang in such a way that melodies seemed to come to life on their own: “Bing Crosby was the first popular singer to learn this trick and he did it in large part by listening to jazz musicians. In turn, he taught a generation of popular singers. The best of them was Frank Sinatra.”

What made crooning possible was the microphone. In his 1984 book “Sinatra”, John Rockwell wrote: “Crooners didn’t have to belt out their voices in order to reach the rafters. A microphone allowed them to float the sound easily on the breath, articulating consonants clearly and naturally.”

Sinatra was listed as lead tenor with the Hoboken Four in 1935 but then he was a light baritone, according to Rockwell. Over the years, his voice deepened to become a classic baritone, the category closest in weight and timbre to a normal male speaking voice, Rockwell said: “What gives Sinatra his distinctive quality, and what makes it easier for him to declaim conversationally, is his vocal ‘edge’ – the focussed sharpness of attack that defines every note. Unlike many singers, classical or pop, his voice rarely slips back into his throat. He lets the tone resonate in his nasal cavities instead of becoming constricted in his throat and chest. In so doing, he is confirming to the finest classical operatic principles.”

Singing into a microphone, however, had its own set of problems. As writer/lyricist Gene Lees pointed out in his 1987 collection of essays, “Singers & the Song”, the plosive consonants “p”, “b”, “t” and “d” and even the aspirated “h” are booby traps to a singer working close to a microphone and often cause the sound that is called “popping the mike”.

Lees said, “You will hear it on many records. Some of the best singers now and then pop one of those letters in a recording session, rattling the speakers in every living room in which the record is later played. In the entire body of his recorded work, you will not hear Sinatra pop a consonant.”

Sinatra gave credit to others. “Mabel Mercer taught me everything I know,” he said once. In Ebony Magazine in 1958, he praised Billie Holiday: “With few exceptions, every major pop singer in the U.S. has been touched in some way by her genius. It is Billie Holiday, who I first heard in 52nd Street clubs in the early 1930s, who was and still remains the single greatest musical influence on me.”

And then there was trombonist Tommy Dorsey. Sinatra says in Alan Frank’s 1978 biography “Sinatra”: “Tommy taught me everything I know about singing. He was my real education.” The band leader certainly helped him with his breathing: “I discovered that ‘sneak pinhole’ in the corner of his mouth; not an actual pinhole but a tiny place where he was breathing. You know, in the middle of a phrase while the note was still flowing through the trombone, he’d take a quick breath and be able to play another four bars.”

Sinatra’s phrasing was a key to the specialness of The Voice, Douglas-Home said: “His phrasing is final, absolute, definitive. So logically and inevitably do the phrases follow each other that, after hearing him sing a song, that song never sounds quite right sung by anyone else. He phrases more as if he is speaking to someone: the intervals, word stresses, note values and rhythms are changed to fit more with the cadences of colloquial speech. Add the breath control, the slurs, chopped notes, grace notes and held notes that have been his trademarks … and you have the basic ingredients that give that natural, effortless credibility to every word he sings.”

Of all the singers of their generation, only Sinatra and Tony Bennett remained at the top. Gene Lees wrote: “Sinatra sailed on through it all, seemingly safe from the storms of fad. What Sinatra’s legacy will be, we cannot know, but for a very long time, Frank Sinatra turned the singing of the American song into an art form and his collected output must be considered a national treasure.”

A longer version of this story appeared in Daily Variety on Nov. 6 1992. Frank Sinatra died in 1998.