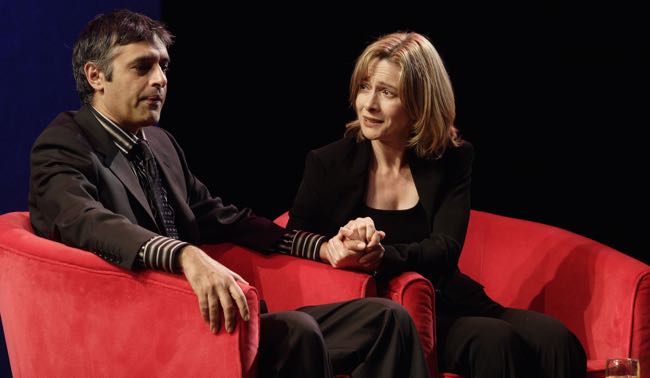 LONDON – David Edgar’s new play at the National, “Playing With Fire” deals with the nuts and bolts of local politics and how it can suffer when the big guns from party headquarters breeze into town but it’s as sober, earnest and dull as a town council meeting.

With Britain facing racial strife in its urban centers beyond the current issue of terrorism, the subject is ripe for drama and Edgar’s approach is serious and intelligent. The play pits centralized party leadership against local government and attempts to show the honorable side and the weaknesses of each.

In the fictional town of Wyverdale, members of the Labour Party dominate the town council with a mayor who is largely ceremonial. Things are a mess, however, with funds assigned misguidedly and pork-barrel projects everywhere.

Concerned that the town is ripe for picking by the opposition, party headquarters decides to dispatch a functionary to sort out the problem. The carrot is that the council will be allowed to carry on if they do as the party wishes. The stick is that there’s a clause in federal law that allows for a mayoralty to be introduced by direct vote, with a mayor who would have full executive authority thus diminishing the power of the existing council.

And so slick and pretty Alex Clifton (Emma Fielding, pictured with Paul Bhattacharjee) finds herself in Wyverdale dealing with a gruff but well-meaning civic leader named George Aldred (David Troughton) and an assortment of men and women ranging from old-timer Arthur Barraclough (Trevor Cooper) to newcomer Anwar Hafiz (Aaron Neil), whose opinions vary greatly, to say the least.

Clifton sets out a series of reforms the council must make with no great expectation the reforms will be made. To everyone’s surprise, the council does as it is bidden. To everyone’s dismay, however, the outcome does nothing to resolve the simmering disharmony between the town’s white and Asian communities.

When a riot breaks out and deaths occur, all parties involved are required to take part in a formal enquiry. Edgar oddly stages parts of the enquiry in the middle of the play with flashbacks to events both preceding and following the civil disorder.

The large cast does its best with the ungainly structure of the play but director Michael Attenborough can do little to enliven what is often simply a stage full of people speaking directly to the audience.

That all politics is local does not seem to be a very new insight and while Edgar relates the events with evident sincerity, the play lacks the punch of such recent National productions as Michael Frayne’s “Democracy” and David Hare’s “The Permanent Way”.