VENICE – ‘Palindromes’ doesn’t seem to know if it’s coming or going. It’s a highly stylised piece of work typical of director Todd Solondz who renders wildly exaggerated sequences on a topic not generally thought of as a basis for comedy. 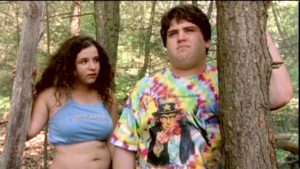 This one is a fable about abortion that follows a very young woman who goes on a quest for a baby she’s no longer capable of having. Solondz leaves it to the viewer to decide if it’s insightful whimsy or meaningless drivel. Box office will likely be restricted to the minority who plump for the former.

The story follows Aviva, a New Jersey 12-year-old who wants nothing more than to get pregnant. When the son of family friends obliges her, Aviva’s mother drags her screaming to an abortion clinic where things go wrong. Unknown to the girl, she is given a hysterectomy.

Unhappily childless, Aviva sets off into the world determined to have her wish. She soon encounters a family of Jesus-loving, right-to-lifers named the Sunshines. She also falls for a lummox named Bob, who prefers to have sex in a slightly irregular way that will not further her cause. Bob is also assigned by the Sunshines to go back to New Jersey and murder Aviva’s abortionist.